Blanquer’s admission of regret came as opposition lawmakers called on President Emmanuel Macron to dismiss his ally from the government over what has now been dubbed “Ibizagate.” 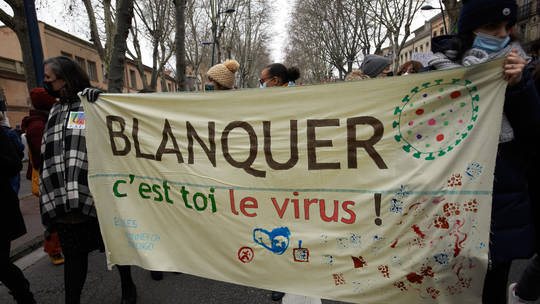 Speaking on Tuesday, France’s education minister Jean-Michel Blanquer told lawmakers that he had done nothing wrong but admitted that he should have chosen a different place to announce the new Covid test rules. “I regret the symbolism,” he added.

“Instead of preparing the return to class with teachers and parents, the minister staged a PR coup with his feet in the sand. This degree of contempt and irresponsibility is unacceptable,” Yannick Jadot, the Greens presidential candidate for the April election, said on Twitter.

Government spokesman Gabriel Attal defended Blanquer in the French press, noting that the state only requires ministers “to be reachable at all times.”

Read more: At least 100,000 people took to the streets of France after president vows to ‘piss off’ the unvaxxed

On January 2, the education minister unveiled new testing and isolation requirements during an interview with Le Parisien newspaper. It was published just hours before students were due to return to school following the festive break.

Le Parisien did not specify that Blanquer was speaking from the Spanish party island of Ibiza. An accompanying photo suggested the minister was in his office.

The new isolation rule riled teachers and parents alike and caused thousands of classes to close and left students queuing outside pharmacies for Covid-19 tests.

In the face of widespread criticism, the government eased testing rules and promised five million high-grade FFP2 masks for school staff following a strike last week. The government has also vowed to hire more teachers to make up for a shortfall as many school staff have been forced to isolate.

The SNUipp-FSU union, the largest among primary school teachers, has called for Blanquer’s dismissal and along with other unions vowed more strike action.

It is understood that the minister married a French journalist in Paris, following the Ibiza break.