Adesina said the Bank would support the AfCTA Secretariat in implementing its various trade and industrial initiatives and programmes. 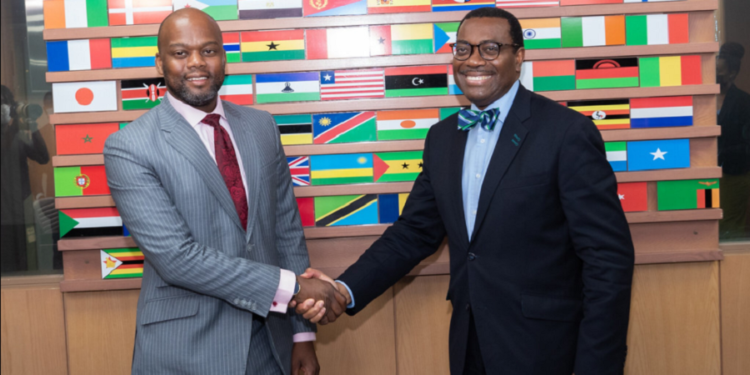 Receiving AfCTA Secretary-General Wamkele Mene, in Abidjan on 29 October, Adesina said “the implementation of the free trade area will become a key component of the Bank’s lending program. We want to have a critical mass of AfCFTA-aligned investments.”

“We have a responsibility to ensure that that the African Continental Free Trade Area is an industrial hub. The zone should become an area for manufacturing, not merely for trading,” Adesina stressed. He said the Bank would work closely with the AfCTA Secretariat to ensure that Africa produces at scale. “We require a large industrial manufacturing zone that generates income and competes on a local and global scale,” the African Development Bank chief said.

Mene said the Secretariat would help member states remove trade barriers to boost intra-African trade. “But we cannot do so without the support of the African Development Bank,” he said, explaining … “we would just be a trading hub with no real output.”

Wamkele Mene said that the African Continental Free Trade Area provided Africa with a great opportunity to develop the necessary infrastructure to support trade and benefit small and medium enterprises.

He sought the Bank’s continuous support. “We want the initiative to run as an African initiative supported by our heads of state and our development finance institutions,” Mene said.

Adesina assured the AfCTA chief of the Bank’s long-term support for the continental initiative. He said it would provide institutional support, particularly in the areas of industrialization, finance, infrastructure, and logistics. The Bank and the Secretariat are to put together an Africa industrialization forum for more directed Bank support. “We want to ensure that industries emerge in a more structured manner in Africa,” the African Development Bank president said.

Both leaders agreed to draft a memorandum of understanding to strengthen their relationship and facilitate effective collaboration.

The African Development Fund, the Bank group’s concessional lending arm, provided support for the establishment of the AfCFTA Secretariat in Accra, Ghana through a $5 million institutional grant to the African Union.