“Africa needs a disruptive model with accompanying policies to change its way of production and alter its economy. -- Oscar Nchaso 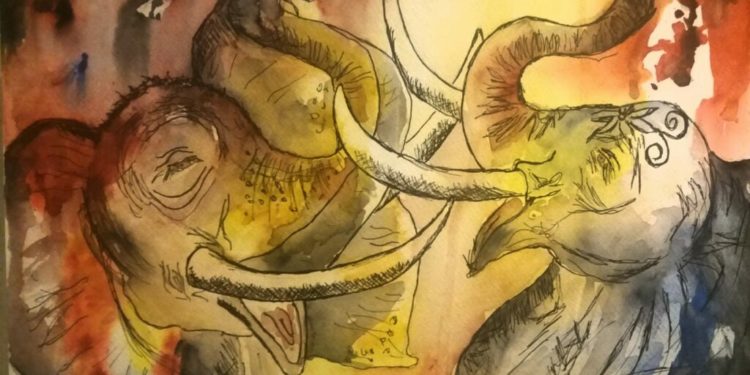 “This proverb alike the Russian Roulette, places into perspective the reality of Global geo Political, Economic, Social, Technological, Ecological and Legal relations and contrasting strengths between Africa and the rest of the world –case in point, the conflict between two economy super powers  China and the United states and how other ensuing conflicts places less positioned countries at a disadvantage,” says Oscar Nchaso, an Economist and author from Equatorial Guinea.

“Africa needs a disruptive model with accompanying policies to change its way of production and alter its economy. Betting on a massive digital education, rich in ecological values, to respond to the aspirations of youth, gender inequality, in order to mitigate the two great events of the century that we have as challenge: climate change and the technological revolution,” he writes in a guest commentary for Africanian.

After reading a couple of articles from different media, it is almost obvious to deduce that all this “distraction” blockade, tariffs, Covid-19 Vaccine race production and distribution, “agreements to stop the trade war” or actually “buy time” to redefine advantageous strategies that improve the quality of life for its citizens.

But as these various variables ensue it is clear that the continent has suffered the most, as it patiently endures and watches on as two elephants battle it out for the alpha position given no thought to the grasses the trample over.

Directly explained, Africa is a potential market for the consumption of goods and products. (Everyone’s punching bag). Let´s talk about the specific case with China to clearly visualize this image.

That the US imposes measures on China and that China responds with forcefulness does not translate into a language other than that these leading countries of the world economy have the excuse or are then “forced” to increase the price of their products, goods and services , with greater impact on the African continent; “the movie viewer who buys the popcorn”.

In a few years China has gone from having a closed economy abroad to discover a fairly dynamic economy, open to trade and investment flows. To the extent that the US has been aware of China’s economic relevance in the world, they have proposed to develop a strategy that would strengthen ties between the US and the Asian giant. (Multinational gurus moved during the 2008 crisis to China to reduce production costs). Every system carries its advantages and disadvantages, or what in this case we call Threats and Opportunities.

The US is committed to strengthening itself more and more through an intense and dynamic relationship with its allies, while at the same time expressing its desire to base this relationship on American values (America First). It has an economy that is characterized by high levels of investment in creativity, research, design and quality.

READ MORE: Dreams Talks: Outgoing US Ambassador to Equatorial Guinea Looks Back at her time in the Country

China, in its transition from quantity to quality, intervenes its exchange rate to boost exports, establishes investment barriers, hinders imports and also not really focusing on protection of intellectual property rights. So, most likely, competition from Chinese products began to increasingly affect the US Foreign Trade Policy. Practices that expose and put into check the viability of the most innovative and creative companies.

But the dilemma moves many miles away from the economic environment, since pirated goods and counterfeits can have serious consequences on the health, welfare and safety of its consumers. The question looms, when are they going to stop almost a barbarity of consumer products that do not exceed a quality control.

The good news as an economist and optimist is that we should not focus on the situtation, “distraction” since we already know it. It is a good time to learn from this experience of the cycles of the world economy, and move towards constant advantageous solutions to mitigate or reduce the risks to which these game fluctuations expose us. Africa needs to strengthen its pillars of self-reliance and self-supply.

Already countries like Rwanda are taking firm and exemplary steps with notable changes such as the launch of their first smart phone made in Africa to mention any. “Africa does not need help but collaboration, not aid but trade.” –Another proverbs says ‘Don’t give me a fish, Teach me to fish’

Strengthening the legal framework and its strict compliance, which requires a better quality of imported products, is not only an advantage but a right of the African population that none of the elephants mention in the middle of their ´war´, since the end user again it is “the grass that suffers.”

Africa, only then, may adopt protective policies, when it is self-sufficient. A commercial strategy that allows Africa to make the most of its resources, that it  considers keys to  its competitiveness staying away from decisions that will take us some steps back like mobile taxes: the services and efficient use of her natural resources and Human Resources. In addition, that these policies will help the sectors and regions that may be damaged by the commercial opening.

It is relevant and crucial to train people for change through cohesion programs for globalization, since the greater conflict in product trade not only shows that African industries are not very prepared to compete with imports, but also, it emphasizes or causes that countries that export consumer products to the African continent to “forget” the principles and good practices of trade. In this regard, there are three critical issues:

1) Self-supply. Increase the capacity of products made in Africa.

3) Adequate management of the areas with the greatest potential for commercial growth (intellectual property rights, certification of services, investment, public procurement and competition of HR),

In order to develop a strategy for trade and investment relations with these importing countries, to create a mutually beneficial and equitable partnership: for this it is undoubted and essential to insist on economic openness in a reciprocal relationship and in achieving the balance of competitive conditions (with advances, for example, such as the Asian giant adopting decision-making measures to fully open its markets to African products), since it has been up to now, and the rest of the countries have benefited more from the relationship.

When humans stop speaking geographically, “my country/region is the best” instead of  Europe, America, Africa, Russia or China first, when we´ll discover there´re no squads, we are all one, and that we should think, say and act like Earth First, we´ll be ready to move to that next level in the universe, we´re thriving for.