The easing in headline inflation is attributed to a drop in both food and non-food inflation. 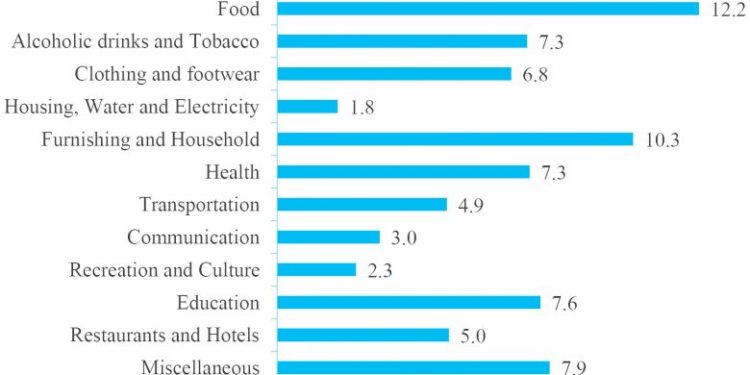 Headline inflation for July 2020 slightly eased by about 0.5 percentage points from 8.5 in June to 8.0, figures from National Statistical Office (NSO) show.

According to NSO, Food and Non-Food Inflation rates stood at 12.2 and 4.4 percent, respectively.

This entails that average prices of goods and services rose at a slower pace during the month under review.

In the past three months, prices of maize, Malawi’s staple food, has been relatively stable, as supply surged.

As part of the food component, traditionally maize impacts the country’s economy given that it constitutes 45.2 percent in the consumer price index-an aggregate basket of goods and services for computing inflation.

In an interview Thursday, economist Dean of Commerce at the Polytechnic, Betchani Tcheleni, said the drop in inflation does not entail stability of the economy.

He attributed the lowering in inflation to a drop in demand for basic commodities and a drop in the prices of maize, among other factors.

“Because of the pandemic, demand has been lower and that would have also led to lower inflation rate. As Malawi is also a predominantly importing nation, drop in imports due to lockdown in other countries also has an impact on inflationary trends,” Tcheleni added.

He however, warned that inflation may pick as the country enters the lean season.

Reserve Bank of Malawi (RBM) maintained a five percent inflation target to be attained by end of first quarter of 2021, despite a possibility of attaining the mark being threatened by possible effects of Covid-19 pandemic.

Inflation remained on a downward spiral since December 2019 where it was seen at 11.5 percent.

The projection was on the back of better food supply, stability in local currency, stable fuel prices and tight fiscal and monetary policies but notwithstanding a slowdown threat to most economies posed by Covid-19 pandemic.