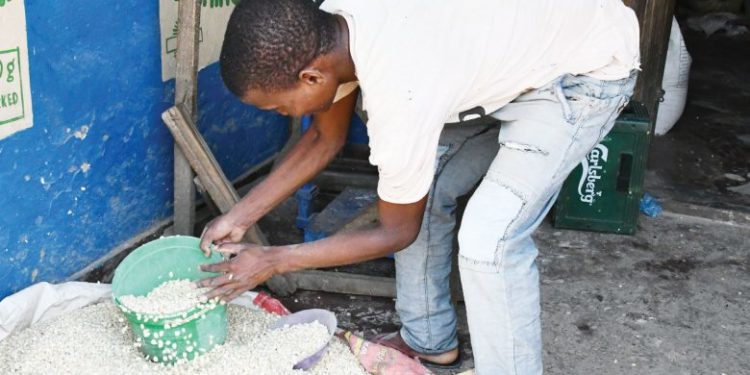 Prices of maize, the country’s staple crop, increased by 22 percent in the first two weeks of the month of September, a snap survey by The Business Times can reveal.

The prices have risen from on average K9,000 per 50 kilogram bag to K11,000 for a similar quantity at present.

In interview, one of the vendors selling maize at Zingwangwa market in Blantyre, Isaac Liotcha, said the increase has been perpetuated by reduced supply as farmers are holding on to their produce to sell to Agriculture Development and Marketing Corporation (Admarc).

“Admarc is buying the maize at K10,000 so the farmers have chosen to sell to admarc because for example at present we would offer a farmer K7,000 a bag for us to sell at K8,000 or K9,000 so they think they will sell to Admarc and maximise earnings however stocks are low on the market so we are taking advantage and increasing the prices,” Liotcha said.

A Nchesi based vendor, Mathews Zalira, said it is not clear whether prices of the commodity will continue to rise or stabilise in coming months as farmers seem to have stock that they are holding on to.

“ It is not clear what the price trends will be but since we are just entering the lean period, I think the maize prices will continue rising because we are yet to reach a period when it becomes scarce but it has already risen,” Zalira said.

Centre for Social Concern (CfSC) says this should be a cause for worry because it means that the lean period will be tough.

CfSC Programs Officer for Economic Governance, Benard Mphepo, said the rise in prices of maize, being the staple grain, will make Malawians to continue wallow in abject poverty.

“The citizens will be struggling to survive because the cost of living as of June 2020 was at K197,000 per household which is already higher than the income of most average Malawians so with this increase, the cost of living will continue to rise,” Mphepo said.

He added that the government should control the market if Malawians are to be protected.

Economic expert who is also Dean of Commerce at the Polytechnic, Betchani Tcheleni, said the rise is a reaction to agricultural commercialisation where many people have started treating agriculture as business.

Tcheleni added that with government announcement that they will be buying maize at a minimum price of K200, people have raised prices and some have kept their maize awaiting higher prices.