Nigerian newspapers: 10 things you need to know this Saturday morning 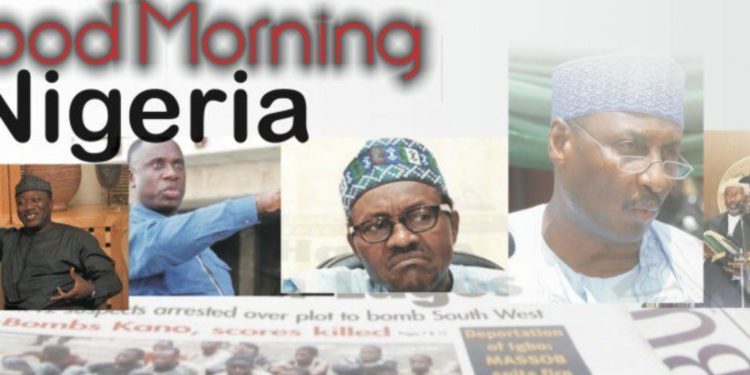 The Management of the Lekki Concession Company has disclosed that it is ready to show the footage of Lekki toll gate shooting. The agency’s Head of Legal Department, Mr Gbolahan Agboluwaje made this known during the Lagos State Judicial Panel of Inquiry for Restitution for Victims of SARS and Related Abuses and Other Matters on Friday. He disclosed that there are hours of recordings on the CCTV footage.

Members of the Lagos Judicial Panel on End SARS were stopped from entering the Military Hospital in Ikoyi by soldiers on Friday. The panel paid an unplanned visit to the hospital’s morgue for some assessment. The judicial team is investigating the shooting at Lekki tollgate where 15 protesters were reportedly killed. It, however, met resistance as it got to the gate of the hospital. It’s not clear yet whether they were allowed in after questioning.

Three weeks after the Ondo State Governorship Election, the candidate of the Peoples Democratic, PDP, Eyitayo Jegede, SAN, on Friday headed to the state election petition tribunal to challenge the victory of Governor Oluwarotimi Akeredolu of the All Progressives Congress, APC. Joined in the petition are the Independent National Electoral Commission, the All Progressives Congress and the Deputy Governor-elect, Lucky Aiyedatiwa.

Governor Ifeanyi Ugwuanyi of Enugu State, Friday, led prominent Igbo leaders to the University of Nigeria Teaching Hospital (UNTH), Ituku/Ozalla, to empathize with the students of Presentation Nursery and Primary School, Awgu Local Government Area and other victims, who were involved in a recent road accident. Ugwuanyi, who wished the school children and other victims quick recovery, consoled the parents of the kids. The governor, therefore, announced that the state government will take care of all their medical bills to any level and urged the management of the hospital to give the victims adequate medical attention.

Governor Babajide Sanwo-Olu of Lagos State, has ordered the relaxation of the curfew in the state from 10pm to 6am.The order was contained in a statement by the Commissioner for Information and Strategy, Mr. Gbenga Omotosho on Friday. Omotosho said the governor commended people of the state for observing the curfew, which is expected to restore normalcy in the state.

The Inspector General of Police, IGP, Mohammed Adamu, has charged officers to defend themselves during an attack. Mohammed gave the directive during a visit to the Police Command in the Federal Capital Territory (FCT) to assess the level of damage during the End SARS protest. He noted that police officers are also humans, hence should protect themselves.

The Nigeria Centre For Disease Control (NCDC) has confirmed 170 new COVID-19 cases with three deaths. The NCDC made this known via its Twitter account on Friday. The public health agency said that the new confirmed cases bring the nation’s total number of COVID-19 infections to 62,691.

No fewer than ten people have been kidnapped in Dan Kurma community of Maru Local Government Area of Zamfara State by some unknown bandits who also killed one person in the operation. One of the kidnapped victims was the wife of the village district head, Hajiya Baraka Sani Usman.

President Muhammadu Buhari on Friday held a video conference with Mr Charles Michel, President of the European Council, during which the latter reiterated Europe’s support for Nigeria’s Dr Ngozi Okonjo-Iweala as the next Director-General of the World Trade Organisation (WTO). The President is leading Nigeria’s charge for Okonjo-Iweala, the country’s former Minister of Finance, to emerge as the first Black and female WTO DG.

Newly-invited Nigerian goalkeeper, Sebastian Osigwe, has tested positive for COVID-19. His Swiss Super League club, Lugano, confirmed this on Friday. Osigwe was only handed his maiden Super Eagles call-up on Thursday, ahead of their Africa Cup of Nations qualifier double-header against Sierra Leone in November, but he and another of his club team-mate, Mattia Bottani contracted the virus, while six other players have been quarantined.