Many experts and analysts across the world now consider the coronavirus pandemic as an unpredictable event that is beyond what is normally expected of a situation. 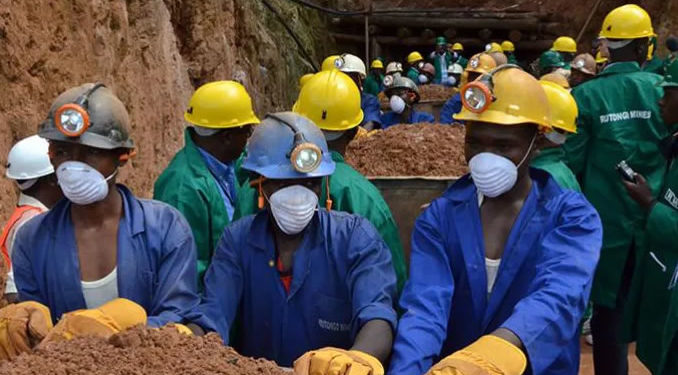 That is true for the most part because the highly infectious disease has had potentially severe consequences on almost every sector than what other crises have caused in the past.

Mining is one of the sectors that have been affected, with falling prices for different types of mineral commodities across different markets.

Globally, mining and mineral trading activities have slowed down as a result of lockdown measures that several countries have put in place, as well as halting of airline schedules.

This has in turn had an impact on Rwanda’s mining sector.

Jean Marie Vianney Faida, who owns Blue Change Mining, a company that mines Coltan and Cassiterite says the novel coronavirus has taken a hit on their activities, leaving them without business.

“It’s been almost two months without carrying out any mining activities, because of the lockdown. This meant that we were not selling minerals, and workers had been forced to go back home,” he says.

Restrictions of movement of people in export destinations like Europe, Asia and America has also forced the demand of minerals to go down, leaving many miners with no business.

“It is only recently that we went back to our mines, but still the movement of people in our countries hasn’t gotten back to normal. That has an impact on the demand of minerals,” Faida notes.

In Rwanda, Cassiterite (tin), Wolfram (tungsten), and Coltan (tantalum) (3Ts), of which the country is ranked among the top producers worldwide have been hit most.

Statistics show that revenue exports of 3Ts decreased by 30.9 per cent due to the drop in international commodity prices in January and February 2020 compared to the same period in 2019.

During the same period, prices of Coltan dropped by -4.6 per cent, Wolfram by -15.3 per cent, and Cassiterite by -14.5 per cent as demand for mined products fell due to slow economic activity.

Mineral exports had already experienced sharp falls due to uncertainty around global trade that resulted from trade wars, particularly between the United States and China.

In the first six months of last year, minerals that Rwanda takes to export markets like coltan, cassiterite and wolframite experienced sharp falls in the prices on the international market.

The impact has expanded similarly affecting other mineral commodities that Rwanda trades including gold.

Aime Ngabo, the operations manager at Aldango, a gold refinery firm based in Kigali, told The New Times that supplies have been delayed and industrial production has gone down.

“We have almost failed to do business as we weren’t able to receive supplies from miners, which has affected our refining work. At the same time, the cost of logistics has risen sharply,” he said.

Ngabo highlighted that due to supply chain disruptions, getting inputs (raw materials) takes longer and it is expensive to send products to export destinations.

“We are now hiring private airfreight to supply our products to our clients in Dubai, because RwandAir no longer operates on that route. The price of logistics is really, really high,” he noted.

While industries and other mining businesses have started to resume operations, it will take longer before the sector revives as many countries are still on lockdown with limited economic activity.

So what’s the recovery plan?

Mining is among priority sectors that the government seeks to revive under its Economic Recovery Plan, which runs from May, 2020 to December 2021.

Under the Plan, which this paper has accessed, the government plans to regorganise small-scale mining operators, consolidating many of them into collective investment groups.

“This will create more jobs that are needed around mines in remote areas, as well as package them into attractive concessions to raise capital,” a document from the Ministry of Finance and Economic Planning reads in part.

It is estimated that there are nearly 100 artisanal and small-scale mining (ASM) operators comprising approximately 34,000-77,000 workers, according to a UK funded programme – Sustainable Development of Mining in Rwanda (SDMR).

Rwanda targets to become a Mineral hub focusing on processing and trading as evidenced by establishment of a gold refinery and tins melting. It is expected that this will add value to the mineral before export and will create more jobs.

According to the current Plan, in a bid to professionalize small-scale mining, there is a need for access to affordable locally made mining equipment.

Rwanda Mines, Petroleum and Gas Board (RMB) has been tasked to establish a mechanism bringing together the mining companies and local equipment manufacturers.