President Macky Sall of Senegal has commended the African Development Bank for the impact of its funded projects in his country, the most recent of these being the Regional Express Train launched last month. 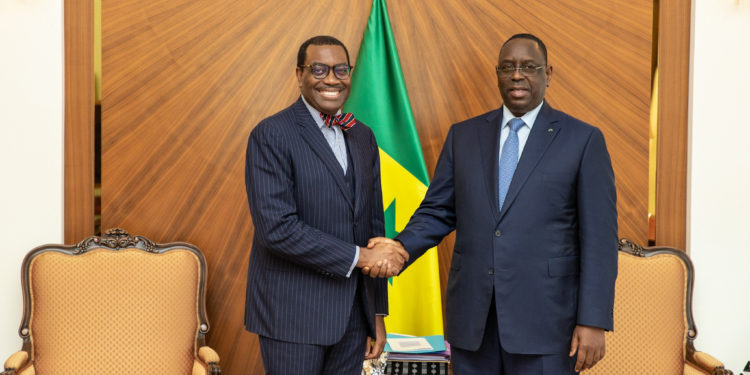 “African Development Bank-funded projects are in line with our own development strategy. Your Bank understands the needs of Senegal,” President Sall said.

Since beginning operations in Senegal in 1972, the African Development Bank has delivered 116 projects in the country worth more than US$ 3.47 billion.

Adesina said the African Development Bank was proud to contribute to Senegal’s development.” I congratulate you, Mr. President, for the impressive achievements that Senegal has made under your leadership. You have delivered major projects in various sectors such as agriculture, social, energy and transport with flagship projects such as the modern Blaise Diagne International Airport, the Toll Road and now the Regional Express Train.”

The Senegalese leader and Adesina agreed to hold a pan-African youth entrepreneurs’ forum to address the financial needs of Africa’s bulging youth population and rally support for the establishment of a youth investment bank.

“The structure of the current financial system does not allow young entrepreneurs to easily obtain credit that is necessary to start up and grow their businesses,” Adesina said. “This is why I am proposing that we hold an investment forum for young Africans, here in Dakar, to discuss a mechanism to finance their businesses,” Adesina told his host. President Sall supported the idea and offered to host the forum in Dakar.

President Sall and the African Development Bank head commended a local organization called the Delegation for Rapid Entrepreneurship for Women and Youth for the successful implementation of its projects, funded largely by the African Development Bank. The Bank has financed the organization’s 16 projects, producing a range of food items including rice and other cereals, and creating jobs for more than 60,000 young people and women in various parts of Senegal.

Adesina praised the influential role played by women, saying, “Africa is developing because of the commitment of women who fight every day to feed their families. That is why, as soon as I took over the helm of the African Development Bank, I set up the Affirmative Finance Action for Women in Africa, AFAWA program to mobilize $5 billion to support women’s promotion and entrepreneurship projects.”

The Bank head and his host discussed other key challenges facing Africa, including insecurity in parts of the continent, the rising levels of debt and the impact of the Covid-19 pandemic, which has claimed lives and adversely affected business, resulting in lost jobs and livelihoods.

“The pandemic is having a devastating effect on our economies. It’s clear we need a financial mechanism to stabilize economies when faced with challenges such as Covid19 pandemic. In Africa we are yet to develop affordable social support networks to keep businesses running and people in their jobs, the way America and countries in Europe did,” said President Sall.

The Senegalese leader said the current economic situation across the continent was compounded by a decline in foreign direct investment because of “an exaggerated perception that Africa carries a higher investment risk than other countries. That perception is also fed by international credit agencies that tend to unfairly lower the credit rating of African countries, simply out of a wrong perception that Africa is more dangerous than other regions in the world.”

On other issues, Adesina praised Senegal for setting an example in terms of providing people with access to clean water. He said this brings the country closer to universal access, with 98.8% and 94% targets reached in urban and rural areas, respectively. He reiterated the African Development Bank’s commitment to support Senegal’s preparations for the World Water Forum in March 2022.

On health, Adesina encouraged the Senegalese government to develop a new health policy. He  emphasized the Bank’s commitment to support the country’s investment in the development of its pharmaceutical sector and the production of vaccines.

Adesina will visit Institut Pasteur de Dakar, which will be manufacturing vaccines. He will also ride on the newly launched Regional Express Train.

After meeting with the Senegalese leader, Adesina met with representatives of Senegal’s private sector.

Adesina said in Senegal 90% of the operations by the African Development Bank are mainly in the public sector and called on the private sector to work closely with the government through Public Private Partnership to accelerate development in the country.