The festival of traditional religions is making a comeback in its entire splendor this year. After the last two editions celebrated at a minimum because of the Covid-19 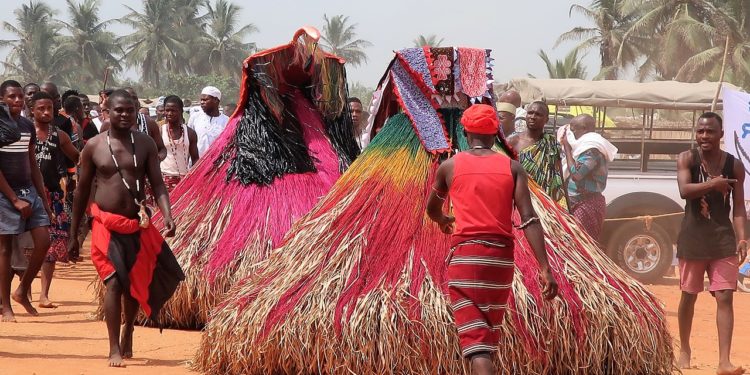 Traditional Day or Fête du Vodoun is a public holiday in Benin that celebrates the nation’s history surrounding the West African religion of Vodoun. The celebration is held annually on January 10 throughout the country but most notably in the city of Ouidah.

Beginning with the slaughter of a goat in honor of the spirits, the festival is filled with singing, dancing and the imbibing of liquor, especially gin. Vodoun was officially declared a religion in Benin in 1996 and the festival has attracted thousands of devotees and tourists to Ouidah to participate in the festivities ever since.

The beach of Ouidah hosted, this Monday, January 10, the official events marking the 29th edition of the national festival of traditional religions.

It is through the Vodoun festival of cults and culture placed under the leadership of the Minister of Tourism, Culture and Arts, Jean-Michel Abimbola.

The festival of traditional religions is making a comeback in its entire splendor this year. After the last two editions celebrated at a minimum because of the Covid-19, here is the vodoun festival in great pomp with ballets and extraordinary parades of various convents.

In Ouidah, on Monday, a dozen convents held in suspense the public who came from all over the world to admire the shows of the deities.

Beads on their necks, red cloths around their foreheads, loincloths tied on their chests for the women and on their waists for the men, the adepts of the Adantô Hounmê convent opened the stage after the official speeches.

The public also admired the parade of the Sakpata convent (god of the earth) whose followers are distinguished by the wearing of red and their dance made, in part, of sequence of pirouettes.

The followers of Mami Dan, dressed in white, with their fragrant perfume, also enlivened the audience. The show of the Zangbéto (guardians of the night) put an end to the ceremony under the watchful eyes of Dada Daagbo Hounon Houna II and the Pontiff of Vodoun Daagbo Hounon Tomadjle Houkpon Houwa Menou II accompanied by the chief of the community of Souza.