Intellectual Property and Copyright in Equatorial Guinea: An ongoing conversation

The event, which is part of the Council for Scientific and Technological Research (CICTE), was held at the Hotel Bisila Palace in Malabo. 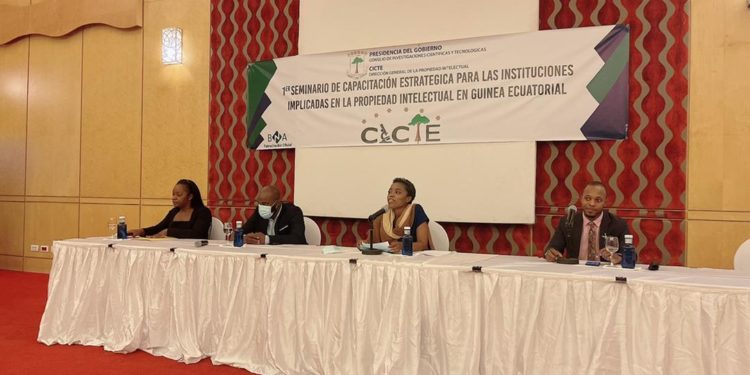 The Ceremony began with the presentation of the invention of the Equatorial Guinean Tomás Basilio, the “Sulfuradora de Cacao”. After it, the scheduled debate continued, under the theme, “The Paradigm of Intellectual Property in Equatorial Guinea: Copyright”. It was led by Gemma Jones, Manager of the Law Firm, Jones &Sacristán, as moderator. The quartet was completed by Óscar A. Nchaso Bekari,  Nguema Mba, and Africa Obama.

The debate began with an contribution by the moderator, in which she indicated that ownership of literary, artistic and scientific works are protected by the copyright that is regulated in Annex VII, of the International Law instrument, fully subscribed by the Republic of Equatorial Guinea, The Bangui Agreement of 1977. She added that “these rights emerge from the moment of creation of the works”, that is, the protection that the instrument of International Law confers on the work is automatic, without the need to carry out any other procedure or formality.  Although, likewise, the Lawyer claimed “that it would be necessary to create a national and optional registry, for the deposit of works, to contribute to the resolution of disputes over the paternity of the creation, assignment, transfer of rights or other issues. ”

It should be noted that the contributions of the panelists were highly praised by the attendees.  They spoke from their personal experience in the Republic of Equatorial Guinea.

The economist and well known writer, Óscar A. Nchaso Bekari, argued “that we are in an embryonic innovating ecosystem” and highlighted the importance of focusing and joining efforts to establish effective and two-way communication, by means of which the involvement of all parties is encouraged, in order to sensitize both the civilian population and the Institutions, about the importance of the protection of Intellectual Property.

On the other hand, the renowned singer, Nguema Mba, added that “he feels the recognition of the public at the national level”, as well as coined, that there are many singers, who also do themselves a disservice by voluntarily devaluing their work by distributing it massively, through any type of platform for free, in a clear attempt to achieve some fame, stardom and social notoriety.

In addition, Africa Obama, better known artistically as Anikana, shared with the audience her personal perception about the importance of the need to promote the protection of Intellectual Property in Equatorial Guinea, while recounting how It has been felt, on the occasions in which they have seen their works used and / or reproduced, without their consent, to be used for other purposes for which they were not initially created.

After the debate, the President of CICTE, Mr. Anacleto Olo Mibuy, stated that “socio-economic development without scientific and technological research is inconceivable,” he added that “the existence of Intellectual Property assets, the diversification, and the dissemination of this type of recognition enhance CICTE’s commitment to the country. He also concluded that “the protection of them guarantees the participation and integration of the nation in international organizations, to which we are attached.”

Finally, the General Director of Intellectual Property, in charge of the National Registry of Trademarks and Patents, Ilma. Estefanía Sabina Abeme Abia, said reiterated that “the progress of the work consists of promoting, disclosing, managing and controlling Intellectual Property assets to guarantee sustainable development and it depends on the generosity and commitment from both the Institutions involved, as well as the artists and authors, who perform important functions for Intellectual Property.”

The ceremony ended with the presentation of certificates to the attendees.