To remind the world that no action toward environmental conservation is too small, Wangari Maathai, 2004 Nobel Peace Prize laureate, told the story of the hummingbird. 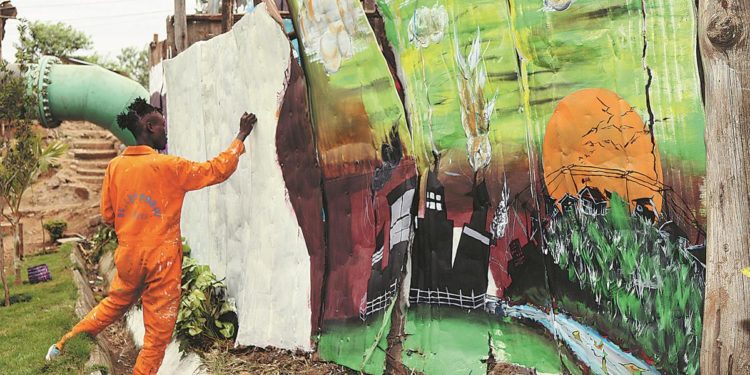 In the story, a hummingbird volunteered to fight a forest fire despite its small size and little impact, while larger animals like the elephants sat by and watched. However, the little hummingbird was determined to do its best and fought the problem instead of sitting by idly.

Back in Maathai’s home country Kenya, a youth group from the capital Nairobi seemed to have taken her words to heart. With very little resources, lack of funds and a humongous task, Komb Green Solutions have slowly but surely started turning the city’s Korogocho slum from an eyesore into a safe space where children can play and adults can live healthy lives.

Though Komb Green Solutions started off with no support at all, it was armed with a passion to change the deteriorating environment in their slum.

Formed in 2017, Komb Green Solutions is a community-based organization that has not only reclaimed parts of the Nairobi River from suffocating garbage, but it has also helped steer the community’s youth away from crime.

Fredrick Okinda, the group’s co-founder, said that before the group was formed, some young people in Korogocho were engaged in crime to earn a living. This always resulted in gang fights, mob justice from slum dwellers and police shootouts, with Okinda having lost many friends to crime.

During an upgrading project where a new bridge linking Dandora and Korogocho slums was being built, Okinda and his co-founders saw an opportunity. Having worked as casual laborers and security officers for the project, the youth decided to carry on by rehabilitating the river under the bridge on a voluntary basis.

“When we started, our main focus was the dumpsite under the bridge,” Okinda said. “We mobilized other young people in the area to get rid of the dumpsite next to the bridge and along the Nairobi River to create a safe space for ourselves and our community.”

As the dumpsite was a hiding place for thieves and a place where drug peddlers and users would go to carry out their illegal activities, the group decided to create a green and safe space for children to play and for young people to relax.

The small park along the riverbank, which has been christened the People’s Park, had solid and human waste that had piled up for nearly 20 years removed by the group.

“It took one year to remove all the waste and plant grass and trees. Komb Green Solutions chose to plant bamboo trees since they absorb more carbon and release more oxygen than other trees. The park was officially opened to the public in November 2018,” Okinda said.

Christopher Widaka, the group’s organizing secretary, added that they started the group as a way of turning away from crime, but became more aware of environmental conservation and the dangers of climate change in the process.

The group, which has now grown to more than 70 members, has also started a food security program aimed at improving nutrition by organizing workshops on organic agriculture, showcasing innovative techniques such as using goat manure to grow fresh vegetables.