On the journey of seeking his place in the world and finding his true identity and passion, Rony Boricó was a catechist, a DJ for 7 years and was even on the verge of being an altar boy. 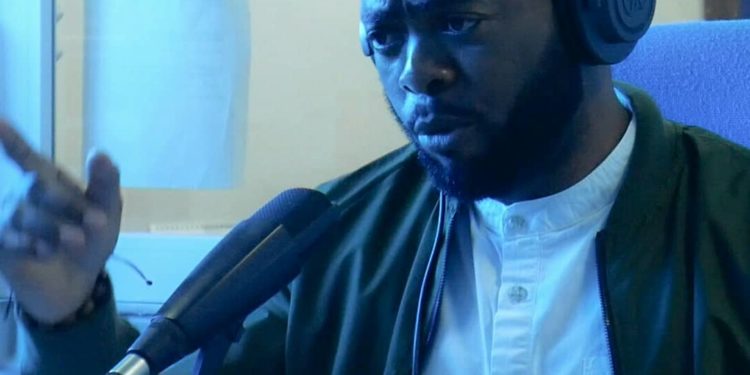 His first contact with the radio was in 2006, working as a sound operator. His skills and thirst for growth led him to go from sound operator at “Radio Asonga 90.0fm” to becoming an announcer, starting in the recording of commercials, then volunteering to read advertisements and announcements, until he created “ rhymes and rhythms ”, a musical program.

To forge his current personality, the announcer went through different identities that ended in the best version of him and that also marked his evolution. His first alter ego was DJ Rony, a character who was dedicated to putting music at venues, events and recording animation discs for parties; he eventually arrived with his debut as an announcer on 90.0fm and became more relevant after leaving the music program rhymes and rhythms to present “radio para todos”, a social program he created.

Rony Boricó, the name behind one of the best broadcasters in Equatorial Guinea, began in 2013, when he applied as a broadcaster on Asonga’s sister station, “Asonga radio 107.0fm” and under the direction of Emerson Reyes, he forged and worked on the “Rony Boricó” brand, until he achieved the version that we all know today.

His rebirth was quite challenging as he had to learn a new way of doing radio. He learnt how to wear multiple hats in the radio house and that led to a rapid, well-rounded growth. Currently, he is the star presenter of one of the most listened to radio station in the country and, in addition, he is the program host of the morning program. Thanks to this, Rony Boricó has been nicknamed by his listeners as, gladiator, the rooster or the madman of the mornings.

With a cheerful, joking and playful personality, Rony set himself a mission for his show – which is to get early risers enjoy some humour, be filled with enthusiasm, encouragement and go to their respective jobs feeling accompanied by someone, even if though it’s through the radio.

S.S: What does it mean to be the Program Host of a radio station?

RB: It is a lot of responsibility, especially for the heterogeneous public that I have as listeners. I always say that there are two things that matter in stories, how they start and how they end; having the beginning of the story of each day on the radio is a responsibility that requires dedication, commitment and a lot of personal responsibility, which you have to assume with yourself and with the audience. The program begins at 6am so, to perform well, I have to go to bed early, which means taking time out of my social life and investing it in the radio.

S.S: How has your work affected your personal life?

RB: Fortunately now I have a partner who understands me and understands what radio means to me and what it means to be a public figure. My family and friends are also aware of the love I have for this job. For example, if someone hosts a party that I cannot attend because I have to get up early the next day, they understand and I have never had misunderstandings with any friend about my work.

S.S: What is the most pleasant thing about radio?

RB:I believe that radio is very fun and I have discovered in recent years that it serves me as therapy. I may already have the biggest problem in the world, all I need is to propose to do my program and do it, because after the program, the problems weigh less. It may seem like the typical phrase used by motivators but it is my truth, going to the radio every day, doing my live shows, joking with the public, helps me to disconnect from the problem and makes me absorb all the positive energy that transmits doing 3 hours live and when I finish my live show, I have the positive feeling that my live hours have given me. That is something that is priceless, that they pay you to do your work that serves as therapy and that also makes people happy in the morning, it is unique.

S.S: Do you consider it a creative activity?

RB: Too much, you can’t be a radio host if you’re not creative, why? Because you can’t come every day and tell the same jokes, make the same joke, play the same song or make the same turns on the news . You have to constantly put your mind to work and be in contact with people. A good speaker is not only a person who knows how to speak, a good speaker has to know how to listen and part of the exercise I do in my daily life is to pay attention to what people do and say and I look for strategies to do what I do and create content.

S. S: Is journalism a profession with a future in the country?

RB: In all parts of the world, without shutting ourselves up in journalism that I always tell people that I am not a journalist but a communicator, I have to say that communication in general has a lot of future, although I would dare to say that in this country it there is still some way to go. I am from radio and radio in the country is still in its infancy, we have not explored this medium, there are a number of activities that can be done and I focus on radio because it is my field but the same happens on television, institutional communication, etc. There is still a lot of ground to explore, it is a profession that I would sincerely recommend to students.

S.S: What would you say to those people who plan to be communication professionals or Journalists?

RB: That they be creative, that they train, that they do not settle for what everyone does, that they think that it is never enough and that more can be done. That this job is not left in the office, this job has to live with you, go to party with you and sleep with you, you have to live with the radio, and it is the only way to do this job, to grow, to learn and to create a brand.

It is interesting to note that Rony Boricó also has two studio albums to his name. A truly versatile individual and entertainer!