African countries, with the lowest vaccination rates compared with others, are gearing up to catch up, hoping to realize herd immunity. 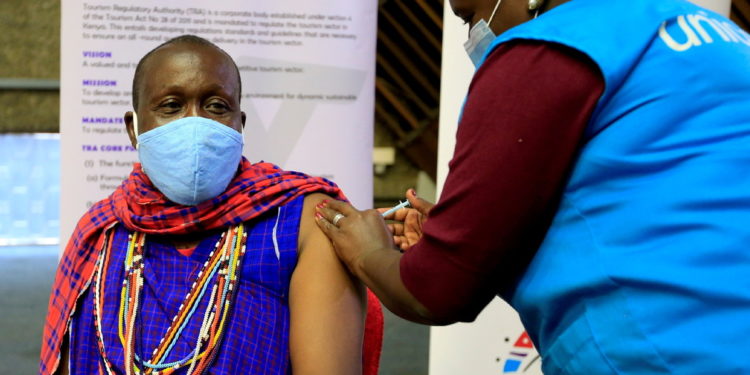 Since last month, when vaccines became available after a near halt, many African countries have been acquiring different types of COVID-19 vaccines via the COVAX distribution facility, the Africa Vaccine Acquisition Task Team and bilateral agreements to accelerate their vaccination campaigns.

The continent has received more than 143 million doses, with 39 million people, about 3 percent of its population, being fully vaccinated.

Eight of the African Union member states, including Morocco, South Africa, Tunisia and Zimbabwe had reached the global target of vaccinating 10 percent of their population. Mauritius and Seychelles have vaccinated more than half their populations.

The 10 percent goal was set by the World Health Assembly, the world’s highest health policy-setting body, in May.

Comoros and Sao Tome and Principe are expected to meet the target, while Senegal, Namibia and Botswana are likely to meet it if they speed up their inoculations, the WHO said.

On Thursday South Africa’s Deputy President, David Mabuza, said the country is on track to meet its target of vaccinating 70 percent of its 59 million people by the end of the year.

The country, which is the most affected in terms of COVID-19 infections and deaths, has fully vaccinated 14.7 percent of its 60 million population.

By Saturday the country had received more than 4.2 million doses of AstraZeneca, Moderna and Johnson & Johnson vaccines, and the ministry of health says the country expects Sinopharm vaccines in the coming days.

Matshidiso Moeti, the WHO regional director for Africa, expressed concern on Thursday about the continuing inequality in the distribution of vaccines.

“With concerns about variants and political pressures driving the introduction of booster shots and countries with high vaccination rates expanding their rollouts to reach to lower-risk groups, our hope for global vaccine equity is once again being challenged,” she said.