Breaking: Ebola outbreak in western Democratic Republic of the Congo reaches 100 cases — WHO

The number of cases in the ongoing Ebola outbreak in western Democratic Republic of the Congo (DRC) has reached 100, a near two-fold increase in a little over five weeks. 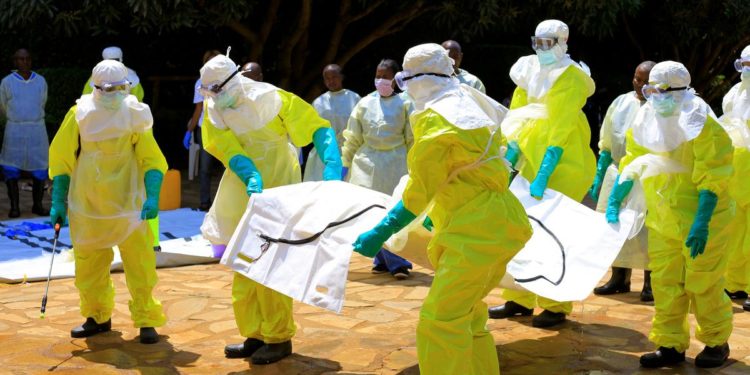 This latest outbreak, DRC’s 11th, was declared on 1 June 2020 in Equateur Province. A cluster of cases was initially detected in Mbandaka, the provincial capital. The outbreak has since spread to 11 of the province’s 17 health zones. Of the 100 cases reported so far, 96 are confirmed and four are probable. Forty-three people have lost their lives.

The outbreak presents significant logistical challenges, with affected communities spanning large distances in remote and densely-forested areas of the province, which straddles the Equator. At its widest points, the outbreak is spread across approximately 300 km both from east to west and from north to south. It can take days to reach affected populations, with responders and supplies often having to traverse areas without roads, necessitating long periods of river boat travel.

An Ebola outbreak occurred in the same province in May 2018 and was contained in less than three months with 54 cases and 33 deaths recorded.

The virus is spreading across a wide and rugged terrain which requires costly interventions and with COVID-19 draining resources and attention, it is hard to scale-up operations

“With 100 Ebola cases in less than 100 days, the outbreak in Equateur Province is evolving in a concerning way,” said Dr Matshidiso Moeti, World Health Organization (WHO) Regional Director for Africa. “The virus is spreading across a wide and rugged terrain which requires costly interventions and with COVID-19 draining resources and attention, it is hard to scale-up operations.”

The current response is underfunded, adding challenges to the existing logistical barriers. WHO initially provided US$ 1.7 million and subsequently supplemented this with another US$ 600 000 from its contingency fund for emergencies. The DRC Ministry of Health has presented an integrated plan to donors and partners for about US$ 40 million and has committed US$ 4 million. There is a critical need for additional support.

“Without extra support the teams on the ground will find it harder to get ahead of the virus,” said Dr Moeti. “COVID-19 is not the only emergency needing robust support. As we know from our recent history we ignore Ebola at our peril.”

The majority of the responders have been mobilized locally under the leadership of the DRC Government. There are currently 90 WHO experts on the ground, as well as experts from nearly 20 partner organizations supporting the response. Since the beginning of the outbreak, WHO has supported the ring vaccination of more than 22 600 people at high risk.

Along with its partners, WHO helped to screen more than 640 000 people across 40 points of control that were set up to help keep travellers safe when crossing into an affected area. WHO has also worked to raise awareness about Ebola among nearly 774 000 people in the affected communities on how to recognize symptoms and seek treatment.

Furthermore, WHO and partners are also ready to support the Ministry of Health in implementing preparedness and readiness activities in currently unaffected health zones of Equateur in a bid to curtail the further spread of the outbreak.