Five new positive cases of covid-19 have been detected in the last 24 hours in Angola, bringing to 24 the number of infections in the country. 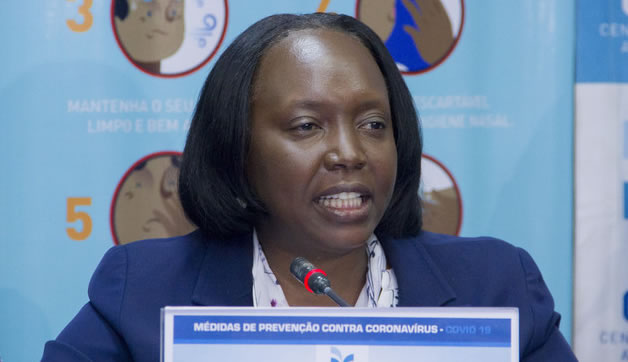 The information was released saturday in Luanda by the Health minister, Sílvia Lutucuta, who said the country has so far recorded two deaths and six cured patients.

This is after Angola remained with 19 positive cases of covid-19 for nine days in a row.

According to minister Sílvia Lutucuta, who was speaking at the daily covid-19 update briefing, the new cases involve Angolan nationals who arrived in the country from Portugal on 21 March. They were in institutional quarantine.

Sílvia Lutucuta stated that the five patients have been referred to medical centres for surveillance and treatment.

She said as well that right now, 200 specimens from institutional quarantine have been collected for testing.

In an effort to curb the spread of the deadly novel coronavirus in the country, Angola is observing a second round of State of Emergency since 11 April. This has been justified with the fact that the threat that prompted the original State of Emergency still hangs on.

Under the lockdown, people are banned from circulating in streets, including sale of non-essential goods.

In this regard, only people duly authorised by their companies to perform specified duties are allowed to circulate.

People in general are only allowed out of their homes for basic needs like purchasing of foodstuffs, medicines, water, cooking gas and medical aid.

A schedule has also been put in place for markets to operate on Tuesdays, Thursdays and Saturdays.