Covid-19: Egypt races ahead in bid to become vaccine hub 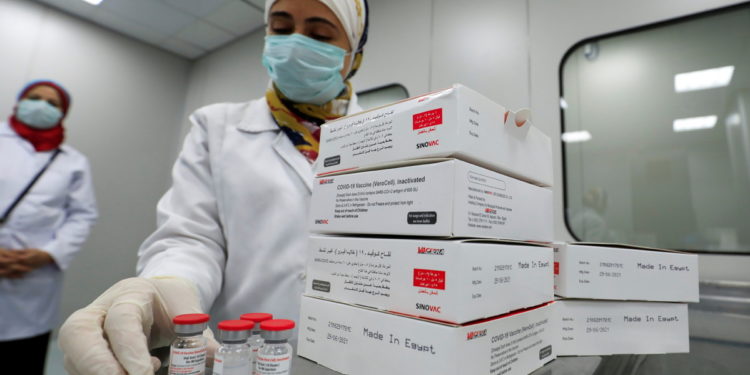 CAIRO－The factories of Egypt’s state-owned vaccine production company have been working nonstop over the past few months to manufacture millions of Sinovac COVID-19 vaccine doses, as the most populous Arab country eyes becoming a regional hub for vaccine production and export.

The vaccines are being produced by the Egyptian Holding Company for Biological Products and Vaccines, or VACSERA, as per an agreement signed in April with Chinese biopharmaceutical company Sinovac.

“Due to the COVID-19 pandemic and in response to the global need of vaccines, we prepared ‘Factory 60’ inside one of the factories and production lines of VACSERA to produce COVID-19 vaccines in partnership with China’s Sinovac,” said Egyptian Health Minister Hala Zayed during a recent tour of a VACSERA factory in Giza Province near downtown Cairo.

Zayed pointed out that the Sinovac production line inside the VACSERA factory can meet the local needs of vaccines with a production capacity of 200 million doses annually.

On the vaccine production line at the VACSERA factory, hundreds of little bottles with red stoppers are carried by conveyors to machines to be filled with jab solution. Then, they go through a labeling process before being packed into boxes by workers dressed in white and sky blue coats and protective gear.

The vaccine doses, which carry the VACSERA-Sinovac label, are then kept in refrigerators.

“We can control and immediately deal with the refrigerators in case of any breakdown. The refrigerators are connected with a generator and an uninterruptible power supply. So, we’re 100 percent reassured that nothing could happen to affect the quality of the vaccine,” said Heba Wali, head of VACSERA.

She added that a delegation from the World Health Organization visited the factory last September and praised its capabilities.

In the west of capital Cairo, a new VACSERA factory complex in Giza’s 6th of October city will include a vaccine production factory to be opened later this year, and will be able to cover Africa’s vaccine needs with a production capacity of about 1 billion doses per year.

Mohamed Hassani, assistant health minister for public health initiatives, said that the Chinese side has sent experts to assist Egypt until the production of the first batch of vaccines was successfully completed.

“The Chinese government strongly supports the manufacture of COVID-19 vaccines in Egypt,” Hassani said, describing the partnership between VACSERA and Sinovac as “the fruit of cooperation” between Egypt and China in fighting COVID-19.