The presidency yesterday released a “chronicle of some of the reactions by the agencies and trained experts under the leadership of President Muhammadu Buhari” as the coronavirus continues to spread in the country. 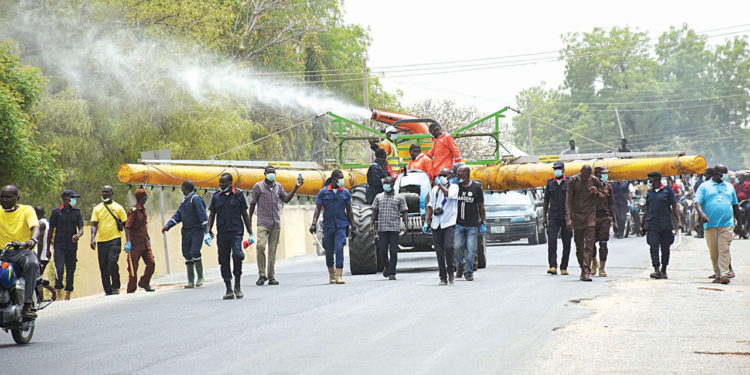 Signed by Special Adviser to the President (Media and Publicity) Femi Adesina, the 50-point list aimed to validate the president’s position during a nationwide broadcast on Sunday, March 29, 2020, wherein Buhari stated: “In Nigeria’s fight against COVID-19, there is no such thing as an overreaction or under-reaction. It is all about the right reaction by the right agencies and trained experts.”

As at 8:00 p.m., yesterday, the Nigerian Centre for Disease Control (NCDC) confirmed 23 new instances via its Twitter handle. It said the 23 cases were in Lagos (nine), FCT (seven), Akwa Ibom (five), Kaduna (one) and Bauchi (one).

With its grim precedent, figures from the pandemic may increase in the next 24 hours.

“March 23: The Chief Justice of Nigeria, Justice Tanko Muhammad ordered all courts in Nigeria to shut down from 24 March; March 23: Nigeria announced the suspension of Federal Executive Council, (FEC) and National Council of State (NCS) meetings indefinitely; March 23: The Independent National Electoral Commission announced suspension of all activities for 14 days; March 24: The Joint Admissions and Matriculation Board suspends activities for two weeks.

“March 27: Federal Government released 10 billion naira to Lagos State, and 5 billion naira special intervention fund to NCDC to equip, expand and provide personnel to its facilities and laboratories across the country.”

Other items are: “Closure of the nation’s international airports and land borders for four weeks in the first instance, to enable the country put up the appropriate policies, processes and infrastructure to cope with suspected and confirmed cases at home, without risking compounding of the situation with more imported cases.

“Only cargo vessels that have been at sea for more than 14days would be allowed to dock in the ports, after the crew have been tested and confirmed disease-free by the Port Health Authorities; NCDC to draft all its recent retirees back into service to beef up manpower.

“President Buhari directs the Minister of Industry, Trade and Investment to work with the Manufacturers Association of Nigeria (MAN), to ensure that production of essential items such as food, medical and pharmaceutical products continues.
This came as Minister of Health Osagie Ehanire disclosed that government is using the window presented by the lockdown in the FCT, Lagos and Ogun States to detect, isolate and treat cases, considering that the incubation period of the virus is two to 12 days.

At a media briefing in Abuja, Ehanire said two new laboratories had been added to the NCDC’s network of molecular laboratories for COVID-19 at the University College Hospital, Ibadan, Oyo State and the Federal Teaching Hospital Abakaliki, Ebonyi State. He noted that with the addition, the country had increased its daily testing capacity from 500 to 1,000.

Earlier, Boss Mustapha, Chairman of the Presidential Task (PTF) Force on COVID-19, said the PTF had developed the Implementation Guide and Protocol for the COVID-19 Lockdown Policy.

“This document will be widely circulated to all security agencies and will be discussed with sub-national entities for the purpose of building synergy in the fight against the virus,” he said.

Meanwhile, cases of COVID-19 might have been under-reported because of inadequate testing capacity.

At the briefing, NCDC Director General Chikwe Ihekweazu said about 2,000 of a cumulative total of 6,655 persons of interest had been tested.

An analysis of these figures shows that only about 30.05 per cent of Nigerians exposed to the virus and possibly positive have been tested. It is estimated that if all the 6,655 exposed persons were tested, at least 10 per cent of them (665) would be positive.

An investigation by The Guardian revealed that the cost of testing one person, with the method currently used by NCDC, is over N10,000. Also, the centres do not have enough reagents, equipment and laboratories for attending to so many people at the same time. Besides, it takes 24 to 48 hours to get results.

While a rapid test kits might produce a result within minutes, the outcome is however unreliable.

In a related development, the Food and Agriculture Organisation of the United Nations (FAO), World Health Organisation (WHO) and the World Trade Organisation (WTO) called for care to minimise the potential impacts of COVID-19 containment on food supply, global trade and food security.

Governments should ensure that responses to COVID-19 do not unintentionally create unwarranted shortages of essential items and exacerbate hunger and malnutrition, they said.

“Millions of people around the world depend on international trade for their food security and livelihoods. Disruptions including hampering movement of agricultural and food industry workers and extending border delays for food containers, result in the spoilage of perishables and increasing food waste.

“Such reactions can alter the balance between food supply and demand, resulting in price spikes and increased price volatility. We learned from previous crises that such measures are particularly damaging for low-income, food-deficit countries and to the efforts of humanitarian organisations to procure food for those in desperate need.

“We must prevent the repeat of such damaging measures. It is at times like this that more, not less, international cooperation becomes vital,” they said.