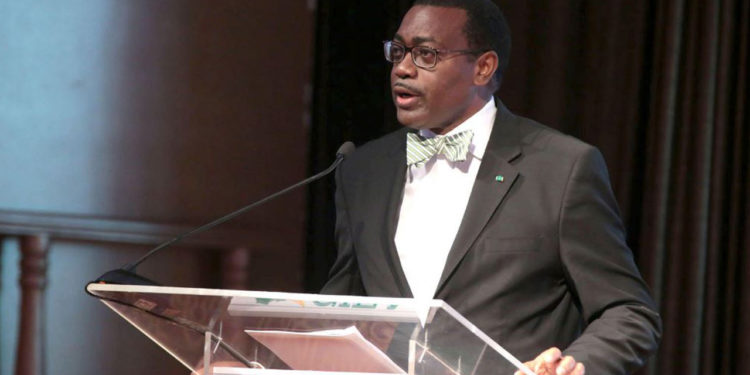 President of the AfDB, Dr Akinwunmi Adesina, who disclosed this on Thursday during a digital conference with dozens of international journalists, said the bank would also consider robust support for small and medium-scale enterprises (SMEs), trade finance guarantees as well as grants to low-income and fragile countries within the framework of the COVID-19 fund.

At a video conference with 25 journalists representing media organisations in Africa and Europe, Dr Adesina said that a little more than half ($5.5 billion) of the response facility would be disbursed in AfDB-member countries as commercial interventions; $3.1 billion would basically go to low-income African countries/fragile economies as grants; $1.4 billion will be earmarked for special private sector intervention, just as the remainder would be used to support SMEs.

“We are going to be deferring debt repayments for the private sector under the facility,” he assured.

“This is a demonstration of the seriousness with which we take the COVID-19,” Adesina said in reference to the $10billion intervention. “The most distressing thing I see is the global news about the number (of people) dying as if we are announcing some form of gold medals. Now is the time for serious action.”

He described Africa’s 11,400 COVID-19 cases and 572 deaths (at the time of the online conference) as “one death too many, not only in Africa but (also) globally. We must move aggressively.”

African ministers of finance had estimated that the continent would need at least $100 billion to navigate through the economic storm of COVID-19. But Adesina, in his response to The Guardian’s query on the stimulus need of the continent, said the Bank’s projection would be between $110 billion and $154 billion.

On fears of sovereign debt default as a result of COVID-19 impact, the AfDB president said the Bank was doing the simulation of stress level of debts for 2019 and had arrived at $108 trillion representing 61 per cent of the Gross Domestic Product (GDP). But with the pandemic in 2020, according to Adesina, Africa’s debt is projected to be a meagre $2.1 trillion representing about 6 percent of the continent’s GDP.

“Sovereign defaults,” he said, “will depend on how we manage the pandemic.” But the Bank re-iterated that it would re-profile all debt repayments bringing in rating agencies, debt issuers and other stakeholders.

“We will provide liquidity to countries facing problem. We will help Africa to manage and mitigate the impact on economies and get out of the pandemic. No country will be left behind, Adesina explained.

Adesina said the pandemic could foreshadow global food crisis, especially in view of the advancing rainy season. To ameliorate this, he said the Bank would be putting together a platform for African countries to bulk their demand for fertiliser and seeds to guarantee cost efficiency in preparation for farming season.

The bank had, prior to the COVID-19 Response Facility, announced the launch of record-breaking $3billion ‘Fight COVID-19 social bond. This Bond, according to the President, was negotiated at 1.075 per cent interest rate. “The bond has just been listed on the London Stock Exchange and it’s oversubscribed.”