The Bank chief said the continent needed $484 billion over the next three years to address the socio-economic impacts of the Covid-19 pandemic and support economic recovery. 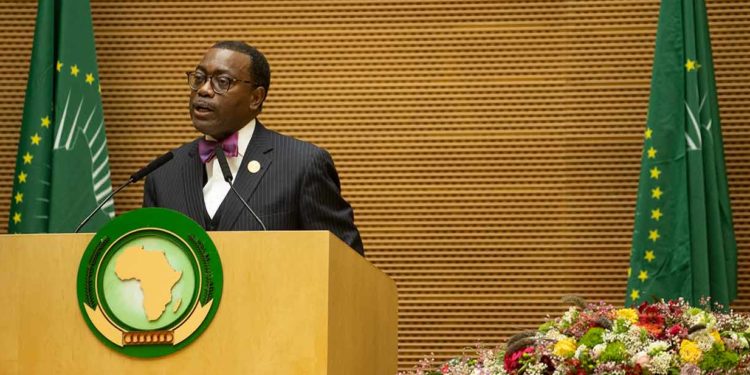 African Development Bank Group President Dr Akinwumi Adesina has said that the most important lesson of the Covid-19 pandemic for Africa is the need to build a defense mechanism against external shocks, especially in healthcare and financial security.

“Investing in health is investing in national security,” Adesina told African leaders on Saturday, at the opening of the 35th African Union Assembly in the Ethiopian capital. “Africa cannot afford to outsource the healthcare security of its 1.4 billion citizens to the benevolence of others.”

Speaking about other critical areas for the continent, such as managing debt, Adesina said: “Africa’s public debt, currently estimated at $546 billion, represents one-quarter of the continent’s GDP and is higher than the combined total annual government revenues of $501 billion.”

Calling on African Union leaders to strongly support the Fund’s 16th replenishment in 2022, Adesina advised that a funding restructure of the African Development Fund would allow the Fund to go to market, leverage its $25 billion in equity, and raise an additional $33 billion in financing for low-income countries.

The Bank Group chief reminded African leaders that they had asked for re-allocated IMF Special Drawing Rights (SDRs) to be channeled through the African Development Bank, a prescribed holder of SDRs.

“Passing the re-allocated SDRs for Africa through the African Development Bank will serve Africa very well, provide financial leverage, and help recapitalize other African financial institutions, many of which the Bank helped to set up,” he said.

Adesina repeated his earlier calls for an African Financial Stability Mechanism to provide liquidity buffers to protect the continent against financial and economic shocks. He said that while other continents have such mechanisms, Africa was the only one that does not. He explained that this led to widespread regional spill-over contagion effects and instability from Covid-19-induced financial shocks. “African economies must be protected,” he stressed.

Addressing the summit plenary earlier, African Union Commission Chairperson Moussa Faki Mahamat said the Covid-19 pandemic had highlighted Africa’s unpreparedness for external shocks like new viruses. He said Africa’s 2.1% retraction in growth had set it back and threatened the achievement of the African Union’s Agenda 2063.

Various heads of state and government spoke of the socio-economic impact of Covid-19 on their countries, and steps they were taking to tackle the virus and other challenges. Host country Ethiopia, which is dealing with several challenges, has made substantial investments in wheat production and is on track to reach its goal of planting 20 billion trees by 2022. Prime Minister Abiy Ahmed said the initiative will mitigate the impacts of climate change.

The African Union’s 2022 Year of Nutrition focuses on strengthening resilience in nutrition and food security on the African continent. With the International Fund for Agricultural Development and the African Union Commission, the African Development Bank launched the Facility for African Food Security and Nutrition at the United Nations Food Systems Summit in 2021.  Adesina said the facility “will mobilize $1 billion to support the delivery of climate resilient technologies to 40 million farmers and produce 100 million metric tons of food to feed 200 million people.” He added, “this will reduce the number of people facing hunger in Africa by 80%.”

Adesina called for accelerated action to advance Africa’s rapid development and sounded a note of optimism.  “With your bold and visionary leadership, a new Africa is emerging. Just as the eagle soars above the storms, so will Africa soar and achieve its destiny. Africa is destined for greatness,” he insisted.