The World Health Organization has warned that Africa could soon become the new epicenter for the pandemic, and a severe lack of ventilators is just one of the concerns that many nations on the continent face. 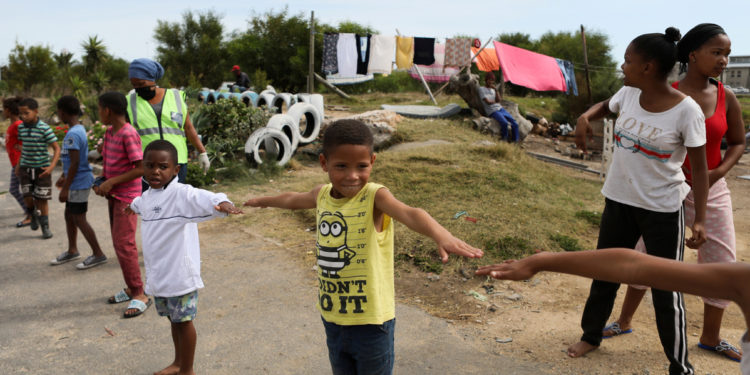 Children practice social distancing while the spread of the coronavirus disease (COVID-19) continues, in an informal settlement in Cape Town, South Africa, April 17, 2020

Mali’s health ministry recently corrected a worrisome media report that claimed the African nation had just one ventilator, a piece of medical equipment that’s essential to healthcare systems during the novel coronavirus crisis.

The updated figure, however, did little to soothe concerns. Mali officials said there are 41 ventilators in public hospitals and 15 in private hospitals across the nation of 19 million people.

COVID-19 has yet to truly take hold in Mali or much of sub-Saharan Africa, a region that accounts for less than 0.5 percent of total cases. So far, around two-thirds of all confirmed COVID-19 cases have occurred across the two largest economies in the world－the United States and China－and the five largest economies in Europe: Germany, the United Kingdom, France, Italy and Spain.

Existing national debt among some of Africa’s poorest countries is being compounded by a dip in exports of commodities and raw materials, as major trading partners contend with the COVID-19 pandemic. African tourism, which accounts for 8.5 percent of the continent’s GDP, has ground to a halt.

Ethiopian Prime Minister Abiy Ahmed has asked leaders from the G20 group of major economies for $150 billion in emergency funding to address this “existential threat to the economies of African countries”.

Last week, finance ministers from the G20 announced plans to freeze an estimated $12 billion in debt obligations for 76 of the world’s poorest nations, with 40 sub-Saharan countries qualifying.

In addition, the International Monetary Fund has announced that it will cancel $215 million of debt payments for 25 countries during the next six months, due to the novel coronavirus pandemic.

Aid and development charity Oxfam International called the move by the G20 an important first step and urged private creditors and multilateral lenders to follow suit.

Poor countries owe huge sums to private banks and investors in New York and London, which “should be pushed to cancel debts by enforcement and not left to voluntary action”, the charity said.

Oxfam also called for the cancelations of all debts due in 2020 to international financial bodies, including the IMF and the World Bank.

“Far more needs to be done to rise to this moment of unprecedented need and save millions of lives,” said Nadia Daar, head of Oxfam International’s Washington, DC, office.”The G20 must not allow the suspended debt payments to accrue into the future; they must cancel all the 2020 debts of all the countries that are being hit by this economic tsunami, and all creditors must follow suit urgently.”

The UK-based Jubilee Debt Coalition said this week’s announcements by the G20 and the IMF amount to a “drop in the ocean “compared with the amount of debt cancellation that will be needed this year and next among low-and middle-income countries. The organization estimates that these nations will require debt moratoriums valued at a combined $300 billion in order to fight the novel coronavirus.

“The scale of the economic crisis faced by developing countries requires the IMF to go much further,” said Sarah-Jayne Clifton, director of the Jubilee Debt Campaign.”We need the cancellation of payments to be extended to a much bigger group of developing countries and be for the next full year.”

Last week, a report from Tokyo-based United Nations University estimated that the COVID-19 crisis could plunge a further 600 million people into poverty, if sufficient action is not taken to safeguard vulnerable communities. In addition, a recent study from the Oxford Poverty and Human Development Initiative estimates that 3.5 billion people are currently left more vulnerable to COVID-19 due to lack of access to clean water, clean cooking fuel and sufficient nutrition.

“This is a crisis that knows no borders,” said Christian Oldiges, who is co-director of metrics and policy at the OPHI.”The sheer scale and devastation of this pandemic will demand bold action on behalf of the most vulnerable.”