Africa: The ‘New World Order’ – A Chance for Africa?

Like a machine out of control, the world of men has run into a frantic race for more profit.  It is a race led by men who will themselves be forgotten at the end of each transformation process. 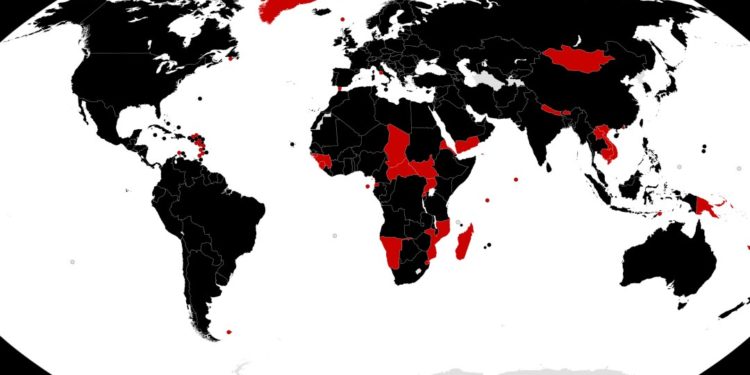 For decades, Africa has struggled to find its way in a process of globalization and being led by money powers with, as a consequence, an increasing widening of inequalities: more prosperity for a tiny minority and  more poverty for the greatest number.

The world seems to be moving towards progressive dehumanization.  The achievement of man is no longer the major concern, but the strengthening of capital through an endless accumulation appears as the priority objective.

Production is localized with the objective of seeking productivity and profitability gains.  Profit sites become the centers of creation of world wealth, a force for good which would be best shared for the greatest happiness of humanity.

I wish through this reflection, and in these difficult times that cross all the nations, to challenge Africa, through its leaders and our Union (the African Union) through its members, to play as a continent in its own right.  I should say as an African Nation.

At the moment when a new world is being built before our eyes, giving birth to a new world order, the Africa we love so much must be a leading player in this process.  I mean as an actor and not spectator.  United Africa should not only claim this place but also take charge of it if necessary!

I would like to quote President Emmanuel Macron in his speech of April 13 “it is our responsibility to build solidarity today, new cooperations”.  I understand here the “responsibility” in the inclusive sense of the term (African leaders), because he had just spoken in other words marked by sincerity, of the need “to help Africa at the economic level with a massive cancelation of debt”.  This posture of President Macron is to be commended for its fair value.  It is up to African leaders to play their full role by speaking with one voice, that of Africa, the one that our youth expect.  With all the assets now in hand, we must not desert the youth who are watching us!

Africa has it’s say in this new globalization, in this globalization of the economy.  Some silver lining!  The present and especially the coming times will certainly be among the saddest and perhaps the most heartbreaking in the history of mankind, but with great hope that a new world, full of hope and renewal will open up.  Humanity is seized with doubt, because of an invisible virus which is crossing the world to sow desolation. “Powerful” countries compete for leadership with poor countries every night at the announcement of the daily results and the gruesome ravages of the disease on a planetary scale.

The gap between rich and poor countries is suddenly “bridged” because the consequence is the same for all rich and poor. The solution so far has not been found and the powerlessness of the people continues to assert itself every day.

I said that Africa has a say, yes!  Africa has its say. Africa must act here and now, with full responsibility, taking its full place, relieved of this burden of an inferiority complex.  Africa will no longer have this alibi, after this period in the contemporary history of peoples, to make it clear that everything that happens to it is due to others … Africa is facing its destiny.  This is where the idea of an African Nation through all-African solidarity will make sense.

Africa must think quickly and well.  It has the means, the skills and the support of friendly countries around some major non-limiting issues.

According to reports from the World Bank and OXFAM, it is mentioned that because of the novel coronavirus pandemic, Sub-Saharan Africa:

• is moving towards its first recession in 25 years;

• the contraction of agricultural production will be between 2.6% and 7% (trade deadlock scenario) with losses between 37 and 79 billion dollars in 2020;

• food imports will decrease by 13 to 25% (for countries which are not self-sufficient);

The G20 has just met, with all due respect to the G20 authorities, I fear that this will be another missed appointment with “56% of the total of the extremely poor people in the world” According to the last report  World Bank Triennial on “Extreme Poverty in the World” the reorganization and the relaxation of the conditions of payment of the debt do not have the same scope as the cancellation of the debt.

Faced with such an apocalyptic scheme, Africa expected from the G20 a bolder, unequivocal response to support the BUDGETARY effort of the States.  Several researchers and analysts have said this.  World Bank Vice President Hafez Ghanem calls official bilateral creditors to a debt service moratorium … to free up cash … and save lives.  I would say that you must dare to go further, towards debt cancellation as suggested by President Macky Sall alongside other African leaders, and as President Macron has just reiterated, so as not to be in a perpetual flight forward which will sooner or later overtake us.  We all know that the response to such a crisis can no longer be solely budgetary, whatever the will of the States.  Liquidity must be injected into the economies to support not only households in difficulty, but also businesses and the informal sector.  The informal sector in Africa, known to all, is one of the most important pillars in the fight against poverty in view of the structure of our social model.

If we want to restart the African economy in conditions of true resilience, all intellectuals know that canceling the debt is the ONLY ALTERNATIVE.  The Bretton Woods institutions (like the G20, moreover) should not set us on a different path by relying on all the instruments at their disposal.

This is why I welcome the initiative taken on April 13, 2020, by the IMF Board of Directors with debt relief for 25 countries, including 6 WAEMU countries, even if it remains insufficient (six months) pending the initiative launched to find the resources to complete for the next two years.  I question myself, however, on reading the full list of beneficiaries, and taking into account the time horizon (2 years), on the exclusion of Côte d’Ivoire and Senegal, for an initiative that wants to provide “subsidies to our poorest and most vulnerable members to cover their debts to the IMF”.  Let us hope that this exclusion will only concern the first 6 months at the risk of seeing a technical and democratic debate take place around the relevance of this decision.

I do not deny the efforts made by the IMF in Senegal through the instruments which are the Rapid Facility Instrument (IFR) and the Rapid Credit Facility (FCR) for nearly 277 billion.  However, lightening is not synonymous with indebtedness even on milder and less restrictive conditions in the provision.  The objective is not only to contain the shock, but to review the profile and the weight of the debt on our economies.  This will free up spaces in the hope of a real resilience of our weak economies to the resumption of economic activity.

Africa in general and the WAEMU countries in particular, today need a massive injection of liquidity, even with the risk of freeing up inflation in a responsible way, to support the productive sectors within the framework of activities.  We should take advantage of this to bring our health care system, that of education and RESEARCH, which we often tend to neglect to the point of pushing our researchers to expatriation.  Some countries were unable to provide emergency services (if any) with a minimum of respirators, masks and protective clothing for medical personnel, when orders in the north were made by the thousands.  I salute in passing the great sacrifice and highly civic behavior of the health personnel who worked in disastrous conditions to manage this pandemic.  These people who gave their lives to save that of others (in all countries of the world) deserve beyond the decorations (if they have any) to be cited as martyrs.

Africa and the world in general expect us to review this model of globalization which everyone knows has reached its limits.  And the most striking demonstration was given by the absence of immediate, coordinated and united responses to some of the most basic requests to fight this pandemic …… with the impossibility of satisfying urgent requests because excessive (regional) centralization of production by profit centers.  The consequence was an indescribable cacophony and an unprecedented state selfishness in the face of the suffering next door, despite all the supposed “benefits” of globalization that we have always been praised for.

For more justice, this economy integrated by globalization can no longer be a corridor arranged so that the search for prosperity for the smallest number is the only objective, even an unconscious one.

Profit centers should no longer be concentrated in a single region for the greatest benefit of the greatest number.