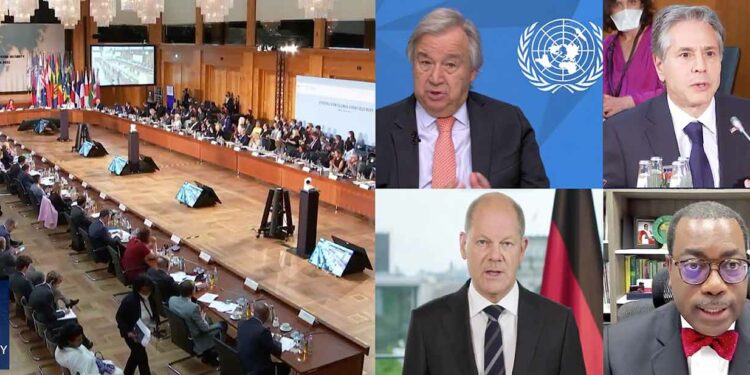 Governments, multilateral Development Banks, international and regional organizations, non-governmental organizations, civil societies, and philanthropists demanded, among others, the release of millions of metric tons of food trapped in Ukraine due to the war.

The German government hosted the conference titled ‘Uniting for Global Food Security,’ to coordinate responses to the global food crisis caused by climate change, the Covid-19 pandemic, and heightened by the war in Ukraine.

In her opening speech, German Foreign Minister Annalena Baerbock said there was an urgent need as a result of the war and disruptions to food production in Ukraine, one of the world’s leading food baskets, to provide humanitarian assistance, especially to vulnerable groups. She said in 2022, Germany would provide €2.8 billion to its humanitarian partners to support relief effort.

“We are calling on everybody to join forces to help put food on the plate for those who are starving, to bring medicine to the sick and to provide shelter to those who have had homes taken from them,” she said: “In all of this, our response needs to be swift and bold – it’s not an easy task, but we are here today to say we are acting united around the world.”

Addressing the conference by videoconference, Dr. Adesina urged Germany and other G7 countries to support a $1.5 billion African Emergency Food Production plan developed jointly by the Bank and the African Union to help African countries avert a looming food crisis.

“While the African Development Bank has mobilized $1.3 billion of the $1.5 billion needed for the African Emergency Food Production Plan, we have a financing gap of $200 million. I would therefore like to request that Germany and all G-7 countries help provide this balance of $200 million,” the Bank Chief said.

Africa relies heavily on cereal exports from Russia and Ukraine. Due to the war, the continent faces a shortage of at least 30 million metric tons of food, especially wheat, maize, and soybeans imported from both countries.

Adesina stressed: “I raise my voice on behalf of the 1.3 billion people affected in Africa by a looming food crisis arising from this war. For Africa, we must, however, move beyond emergency food aid. We must prioritize food production. We have the technology to feed Africa – Africa does not need to hold bowls in hand to beg for food. Africa needs seeds in the ground to produce food for itself.”

The African Emergency Food Production Facility will provide 20 million smallholder farmers with certified seeds. The plan will increase access to agricultural fertilizers and enable them to rapidly produce 38 million tons of food worth $12 billion.

Ministers from African countries, including South Africa, Mauritania, Tunisia and the Democratic Republic of the Congo, highlighted the socio-economic impact of climate change, Covid-19 and the war in Ukraine. They called for accelerated effort to end the war.

UN Secretary General Antonio Guterres issued a strong plea saying, “hundreds of millions of people on the poverty line have been crushed by this crisis – informal workers who are mainly women, smallholder farmers, micro and small business owners, people with disabilities.”

Guterres called on “developed nations and international financial institutions to make resources available to help governments support and invest in their people, leaving no one behind. Developing countries that face debt default must have access to effective debt relief to keep their economies afloat and their people thriving.”

US Secretary of State Antony Blinken said: “We’ve all cited numbers of this growing food insecurity. But what we know is this: We know that those numbers are people, real people, real lives, real livelihoods, mothers, fathers, children.”

Blinken said it is time to turn the responsibilities and pledges of the various blocks and institutions into concrete action. He said the US last month approved $5.5 billion in new funding for global food security and humanitarian assistance in addition to an earlier commitment of $2.8 billion.