An African giant pouched rat, named Magawa, who found 78 landmines and 38 unexploded ordinances in Cambodia and was awarded a medal for his service, has passed away at the age of eight. 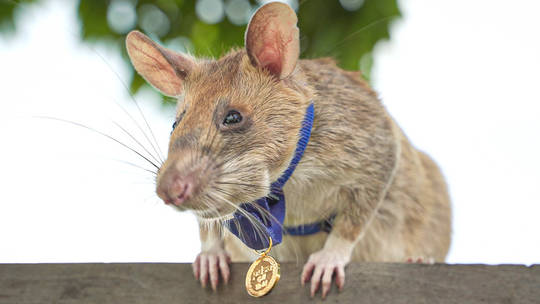 The rodent’s bravery allowed it to detect more than a hundred explosives and clear 225,000 square meters of land in Cambodia

The news was shared earlier this week by APOPO, a mine-clearing NGO, which trains rats to detect mines.

“Magawa was in good health and spent most of last week playing with his usual enthusiasm, but towards the weekend, he started to slow down, napping more and showing less interest in food in his last days,” it said, adding that the creature had “passed away peacefully.”

The “hero rat” has done “incredible work” over the years, which helped “communities in Cambodia to live, work, and play without fear of losing life or limb,” APOPO pointed out.

In 2020, this work landed Magawa a gold medal from the British veterinary charity the People’s Dispensary for Sick Animals. It’s the highest award for gallantry an animal can receive.

The legendary rat was born at Sokoine University of Agriculture in Tanzania in 2013, where APOPO has a training center. While there, Magawa was taught to detect landmines through the scent of chemicals present in them.

At the age of three, the rodent was sent to Cambodia, which remains dotted with landmines after years of internal and external conflicts between 1975 and 1988. The explosives planted in the ground have left tens of thousands injured and greatly limited the size of usable land.

Magawa’s handlers have always praised his extraordinary stamina, which saw him covering larger areas than his fellow mine-sniffing rats every day.

During his career, he found more than a hundred explosives, which allowed 225,000 square meters of land to be declared mine-free. Having been the star of many a news report over the years, he retired from active service last June.

African giant pouched rats have established themselves as perfect landmine detectors because they compensate for their poor vision with their great sense of smell and memory. Not only are they cheaper to train than service dogs, but, weighing between 1.0 and 1.4kg, they are also light enough not to set off mines when they step on them.

They can search an area the size of a tennis court in just 30 minutes, while a human with a metal detector usually requires a few days to do the same job.