Scholars and officials have called on African students studying in China to further advance their role as a bridge between the two sides. 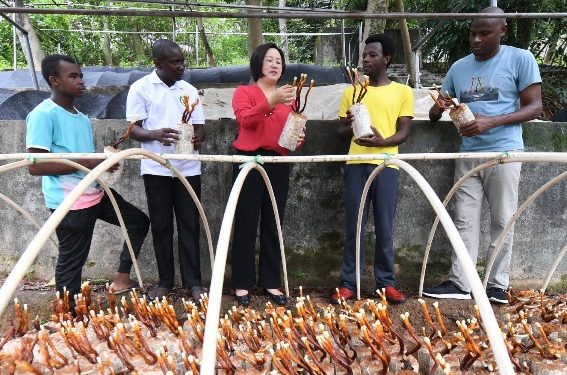 The China-Africa friendship can be strengthened through bilateral exchanges and cooperation, they said.

“African students living and studying in China have become a representative group to fulfill the mission of China-Africa friendship,” Gao Xiang, vice-president of the Chinese Academy of Social Sciences, said at the first Forum on International Students from Africa on Sunday.

“They have also laid a solid foundation for greater progress in the comprehensive China-Africa partnership of strategic importance in the new era.”

The forum in Beijing, hosted by the academy’s China-Africa Institute, was themed “We, the inheritors of Africa-China friendship”. Attending were diplomats, scholars in foreign relations, media representatives and African international students studying in universities in China.

The forum was held ahead of a meeting of the Forum on China-Africa Cooperation, a major platform for bilateral cooperation, in Senegal later this year.

Gao said in the opening remarks that an increasing number of students from Africa have come to China for study over the past decades, and China has become a top destination for international students from Africa, ranking second only next to France. The number of African students studying in China surpassed 80,000 in 2018.

Over the past six decades, many African students have assumed important roles after returning to their homelands and have contributed greatly to the China-Africa friendship, Gao said. Among them were top government officials, senior experts in various fields and top executives of major China-Africa cooperation projects in Africa, he said.

Martin Mpana, dean of the African Diplomatic Corps and Cameroon’s ambassador to China, said international students from Africa studying in China have done a lot to promote the China-Africa friendship over the past 65 years.

He urged them to make even better use of the knowledge and skills learned in China to develop their countries.

“China is making miracles every day, and I hope African youths studying in China can study the secrets of China’s development, so after you come back you can play your role and contribute to Africa eradicating poverty, which has long been a problem for the continent,” he told African students at Sunday’s gathering. His comments were translated from French.

“You should become bridge of Africa-China friendship to promote the development of bilateral relations,” he said.

As for the upcoming Forum on China-Africa Cooperation, Mpana said he expects many policies will be rolled out with the aim of deepening bilateral cooperation.

Tiando S. Damien, a student from Benin who is a PhD candidate in the China University of Geosciences in Wuhan, Hubei province, said the future of African countries lies in the hands of the young, and China’s success provides valuable experiences for Africa’s development.

“China has chosen a development mode that fits its own reality, and African countries can also do this,” he said.

The leadership of the Communist Party of China has been a key factor in China’s success, said Damien.

Damien was among those international students who refused to leave Wuhan at the start of the COVID-19 epidemic early last year and instead worked with their Chinese hosts to fight the disease.

“It was very natural for me to fight the epidemic shoulders to shoulders with Chinese people as if we were family members,” he said.