Mohammed said she had been left near tears while hearing what the women had experienced, which included gang rape and rape in front of children. 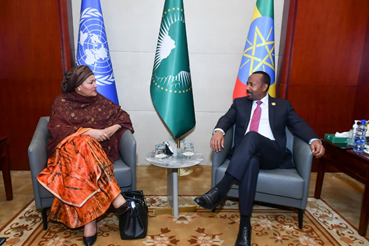 Deputy U.N. Secretary-General Amina Mohammed said on Friday she was deeply shaken by accounts of rape from Ethiopian women, which she described as “your worst nightmare.”

Speaking to reporters in New York a day after returning from Ethiopia, Mohammed said she had been left near tears while hearing what the women had experienced, which included gang rape and rape in front of children.

She called for accountability for atrocities committed against women and recounted sights of famine in the crisis-torn country.

“In your worst nightmares you cannot imagine what has happened to the women in Ethiopia,” she said of the “incredibly emotional” visit. “It is going to be a lifelong healing process for many, many women and children in Ethiopia.”

War erupted in Ethiopia’s Tigray in November 2020, pitting the Ethiopian government and its allies, including Afar troops, against forces loyal to the Tigray People’s Liberation Front (TPLF), which controls the region.

All sides fighting in the war committed violations that may amount to war crimes, according to a joint investigation by the United Nations and Ethiopia published in November. The report accuses all sides of torturing and killing civilians, carrying out gang rapes and making arrests on the basis of ethnicity.

“Everyone is to blame. They were committed across the borders and regions,” Mohammed said on Friday. “Without a shadow of a doubt, justice and accountability has to be had.”

The government has said it has prosecuted individual soldiers, although it has provided no details, while the TPLF has said any soldiers found guilty would be punished.

The conflict has also been compounded by drought, which has left several hundred thousand people in Tigray suffering famine. “I saw famine,” Mohammed said. “There’s clearly malnutrition, many, many diseases.”