A rocket attack targeting the Baghdad International Airport on Friday, which damaged two civilian plane and the airport's runway, was aimed at isolating Iraq internationally by undermining its reputation, Iraqi officials said. 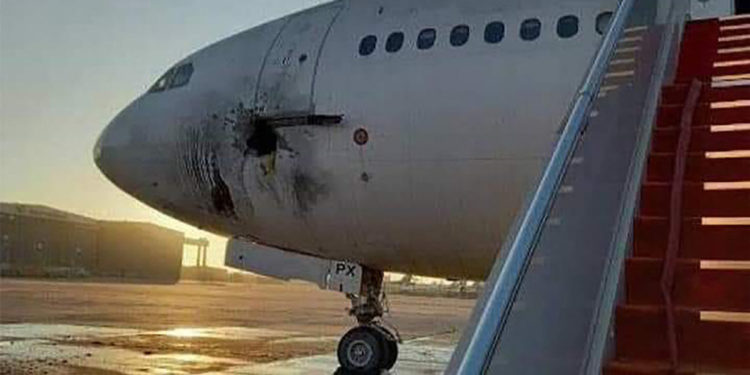 The rocket attack on the airport “represents a new attempt to undermine Iraq’s reputation, which we have endeavored to restore regionally and internationally, through endangering international flight standards at Iraqi airports and spreading an atmosphere of suspicion about internal security”, Iraqi Prime Minister Mustafa al-Kadhimi was quoted as saying in a statement by his media office.

Al-Kadhimi called upon all political parties to “express their clear rejection and condemnation of this dangerous attack, as silence on such attacks is a political shelter for criminals”, according to the statement.

The prime minister also urged the international community “not to impose restrictions on travel or air transportation to and from Iraq” as part of the efforts to “deter terrorists from achieving their goal”.

READ MORE: Washington: US reveals whether it will impose sanctions on Putin – media

Earlier in the day, a source in the Iraqi interior ministry told Xinhua that the rocket strike was directed at Victory Base, a military air base around the international airport that houses several US experts and organizations.

Four rockets were shot down by the air defense system, while another two hit targets including a civilian plane, the source said on condition of anonymity, adding no casualties were reported in the attack.

According to a statement released by the media office of the Iraqi Joint Operations Command (JOC), unidentified militias fired six Katyusha rockets on the area of Baghdad International Airport, damaging two civilian planes.

READ MORE: WHO publishes new global data on the use of clean and polluting fuels for cooking by fuel type

Iraqi security forces spotted a rocket launcher with three unfired rockets in the Abu Ghraib area in the north of the airport and defused them, the statement said.

The security forces launched an investigation into the incident and found some clues about the perpetrators who will be brought to justice, the JOC statement added.

No group has so far claimed responsibility for the attack, but militias frequently target Iraqi military bases housing US military advisors across Iraq, as well as the US embassy in Baghdad.

Flights have resumed at all airports around the country, including Baghdad International Airport, according to the Iraqi Civil Aviation Authority.

Following the attack, the Sadrist bloc, led by famous Shiite cleric Moqtada al-Sadr, promised in a tweet to “free Iraq from terrorism and uncontrolled weaponry”.

In a separate tweet, Hassan al-Adhari, head of the Sadrist Movement, said targeting “government facilities, in particular Baghdad International Airport, is one of the actions of Iraq’s enemies who seek to isolate Iraq internationally and economically”.

In a statement, the UN Assistance Mission for Iraq voiced its great concern regarding the ongoing wave of attacks in Iraq targeting political party offices, residences, and businesses, including the recent rocket attack on Baghdad International Airport.

The statement urged all the Iraqi parties “to move beyond condemnations and swiftly pull together to expose those behind it (attack)”.