The feats recorded this far speaks of the undying determination by customs and security officials to keep Cameroon’s air, land and maritime borders safe. 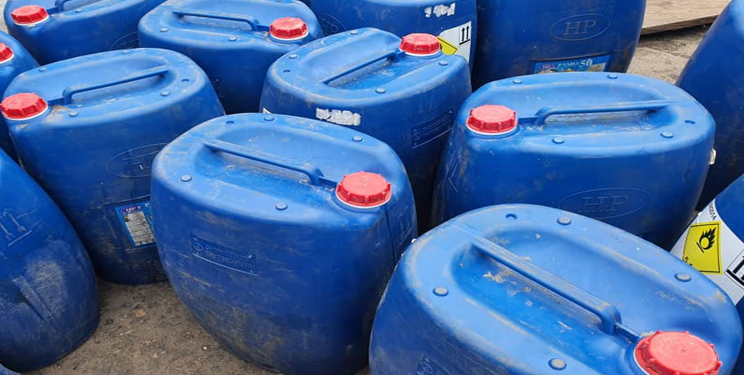 Customs officials in Cameroon have impounded over 1100 litres of Hydrogen peroxide, a chemical said to be used by separatist fighters in the country’s conflict-hit North West and South West regions to manufacture improvise explosive devices used in attacking security forces.

As reported by state-owned media organ, Cameroon Radio Television, CRTV, the chemicals were impounded in Idenau, a border locality in West Coast Subdivision, Fako division in the country’s troubled in the troubled South West region.

The 22 gallons of 50 litres each seizure which is the second of its kind falls within joint efforts by the customs department, the defence and security forces in Cameroon alongside their counterparts of neighbouringNigeria to eradicate all forms of transborder crimes.

The seizure falls within serious commitment taken during the Abuja transborder security committee meeting that rounded up between the governments of Cameroon and Nigeria last August 26.

The seizure is seen as fruits of the just ended meeting. The meeting strategized to beef up security and vigilance between Cameroon and Nigeria borders as well as device ways to thwart all separatists and jihadists activities that threaten peace.

Cameroon’s Customs department, it should be recalled was part of the delegation that participated during the high-stakes security committee meeting in Abuja. Customs officials have of recent tighten the noose to ensure that the porous nature of the borders are put under constant check in order for it not to used for the trafficking of chemical substances or weapons that may  help fuel the crisis back home.

The seizure in Idenau comes weeks after closed to 9000 daggers onboard a truck were impounded in Kousseri, in the Logone and Chari division in the country’s Far North region, still by customs officials.

The development at Idenau comes at a time a deal aimed at smuggling ammunition into the country through the Douala airport was uncovered, according to the CRTV.

The feats recorded this far speaks of the undying determination by customs and security officials to keep Cameroon’s air, land and maritime borders safe. Officials of the customs department like defence and security forces are federating forces not to leave anything by chance.

The seizure comes barely weeks after the governments of Cameroon and Nigeria met and renewed commitment and strategies to thwart all attempts by secessionist and terrorist groups threatening peace in both countries.

The fruits of such intensified bilateral cooperation to stamp out security concerns began paying off at the close of the 8thtransborder security committee meeting in Abuja August 26. The meeting had strong anti-secessionists and terrorists resolutions for the interest of both countries.

The spinoffs of the renewed security ties had been noticed with the recent arrest by police authorities in Nigeria, of a suspected Amba agent in possession of a huge consignment of what they said are war weapons.

However, former United States of America Assistant Secretary of State for African Affairs, Herman J. Cohen, in tweet September 3 said the arrest of arms traffickers who are accused of supplying weapons to sepatist fighters in the Anglophone regions is a clear indication that separatist fighters have unlimited support from neighbouring Nigeria.

“Arrest of weapons traffickers selling arms to West Cameroon separatists tells us that Cameroonian Anglophone rebels have access to unlimited support from neighbouring Nigeria, and therefore cannot be defeated by the Yaounde regime,” the retired US diplomat with a wealth of experience on African affairs, adding that“the situation [Anglophone crisis] is ripe for mediation”.