Cameroon’s Prime Minister is in the region for a four-day working visit to talk the aggrieved population to see the need to embrace peace. 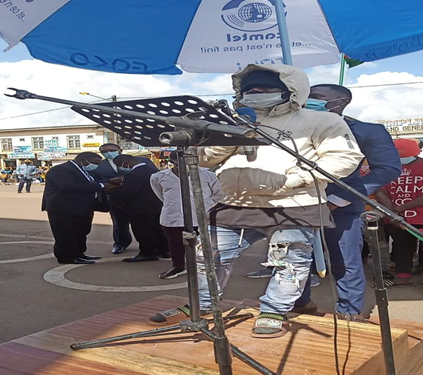 At least 13 member of non-state armed groups operating in Cameroon’s North West and South West regions with hope of creating a putative state they call Ambazonia have heeded to President Paul Biya’s peace call and publicly surrendered their weapons.

The fighters led by famous and dreaded ‘General’ Scatter dropped their weapons at the Bamenda Commercial Avenue. They were presented to the public shortly after the address of the Prime Minister, Chief Dr Joseph Dion Ngute.

Cameroon’s Prime Minister is in the region for a four-day working visit to talk the aggrieved population to see the need to embrace peace. The repentant fighters handed over two AK47 guns, an action pomp, Dane guns, improvised explosive devices among others.

“We have decided to leave the bushes and join our brothers and sisters so we can contribute to restoring peace in our area,” said self-styled separatist ‘General’ Scatter.

“We left the bush 13 of us. We had eight weapons including two AK47 guns. We have handed over the guns and other weapons to security forces,” he disclosed.

The Prime Minister praised the ex-fighters for their sense of understanding and respect to the call from the president of the Republic and told them that government would do everything possible to reintegrate them into society.

To recall is the fact that during the visit of the PM to the South West region in 2019, at least 21 fighters surrendered their weapons. Many are those who believe in the peace approach of the Head of Government, who, has since his appointment committed himself to see an end to the ongoing bloodletting in the two English-speaking regions.

Dion Ngute will while in the Bamenda grant audiences to all the living forces of the region from division to division. This, official say, would permit him have a reality of what is on the ground as well as get proposals on how the situation could be brought back to normal.

He will also evaluate the implementation of the resolutions taken during the Major National Dialogue which President Biya convened to seek lasting solutions to the sociopolitical upheavals.