The grant is expected to benefit over 185,000 vulnerable persons in the Far North, North, Adamawa, East, North West and South West regions. 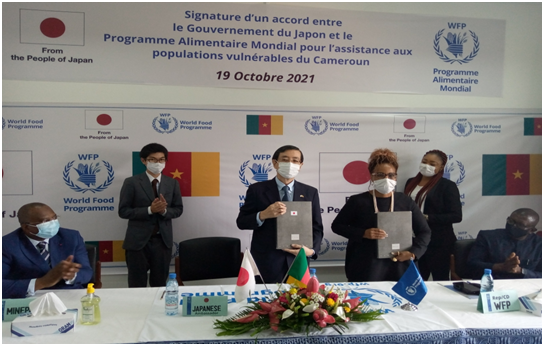 The government of Japan has through its embassy in Yaounde, Cameroon, donated USD 1.8 million to the United Nations World Food Programme, WFP Cameroon,to enable the organisationprovide food and nutrition assistance to refugees, Internally Displaced Persons, IDPs, and vulnerable populations in six regions of Cameroon in 2021.

WFP Cameroon Country Director appreciated the Japanese government for continuous support describing relations between them as strong. “WFP is extremely grateful for the continued generosity of the people of Japan,”Wanja said while urging other governments to join to support the WFP.

“As we move towards rolling out our 5-year strategic plan, partners like the government of Japan are more than ever needed to ensure adequate provision of lifesaving and life-changing response in Cameroon,” she stated.

Wanja said Japan is one of WFP’s strongest partners since the refugee situation in Cameroon started in 2012, having significantly contributed over 29 million US dollars (about 8.5 billion) to their activities.

She said without the strong support, WFP won’t have been able to support vulnerable population in the six regions it currently intervenes to give additional push to government’s national development plan.

Wanja said the grant will enable WFP to provide school feeding and nutrition support to refugees, IDPs, returnees and host communities with children below the age of 5, support malnourished kids, pregnant women, breastfeeding mothers, HIV/AIDS communities, and reinforce school feeding efforts put in place by government as well as expand their resilience building.

“We know that in the refugee operation we cannot continue providing just food assistance but strive to make them autonomous. It will also go to build communities livelihood so that they can continue to be autonomous,”Wanja disclosed.

On his part, the Japanese diplomat said his government attaches great importance in the field of cooperation for food security. He said the contribution reaffirms the solidarity of the Japanese people towards needy persons residing in Cameroon. Osawa expressed the wish to see an improvement in food situation of vulnerable people through the contribution.

“Concerned about the situation of the most vulnerable, which is aggravated by COVID-19, we decided to extend our assistance through WFP to address the urgent needs of these people,” he said, adding that Africa’s peace and stability is one of the main fields of their cooperation especially as they approach the 8th meeting of the Tokyo International Conference on African Development (TICAD 8).

The grant is expected to benefit over 185,000 vulnerable persons in the Far North, North, Adamawa, East, North West and South West regions. The Far North region has witnessed an influx in refugees from neighbouringNigeria as a result of Boko Haram attacks as well as displacements within Cameroon.

The East, Adamawa and North regions host high numbers of refugees who have fled violence in the Central African Republic.These regions host at least 436,665 refugees with CAR and Nigeria having at least 320,970 and 115,695 respectively as well as at least 321,000 IDPs.

Meanwhile, the socio-political crisis in North West and South West regions continue to deteriorate, dislocating normal livelihoods and production activities and resulting in the displacement of over 1 million people.The 2021 humanitarian Response Plan for Cameroon outlines that 4.4 million people are in need of humanitarian assistance.