The Chadian army said Thursday it had wound up an offensive against Boko Haram jihadists in the Lake Chad border region in which 52 troops and 1,000 jihadists were killed. 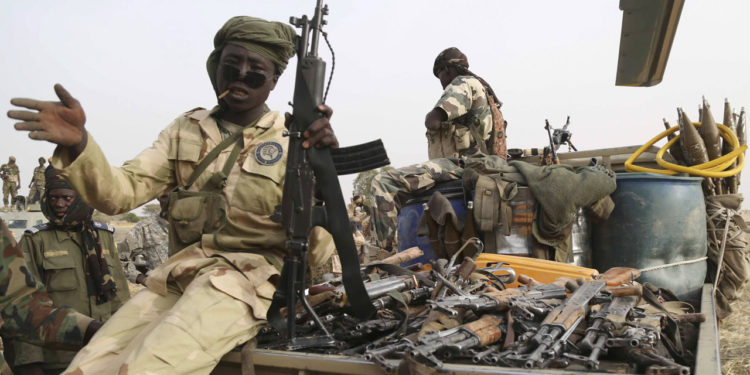 Army spokesman Colonel Azem Bermendoa Agouna told AFP that the operation, launched after nearly 100 soldiers were killed last month, ended Wednesday after the Nigerian jihadists were forced out of the country.

“A thousand terrorists have been killed, 50 motorised canoes have been destroyed,” he said, referring to a large boat also called a pirogue.

It is the first official snapshot of the outcome of Operation Bohoma Anger, launched after Chad’s armed forces suffered their biggest one-day loss in their history.

Lake Chad is a vast, marshy body of water where the borders of Niger, Nigeria, Chad and Cameroon meet.

The western shores of the lake have been hit by jihadists crossing from northeastern Nigeria, where Boko Haram launched a bloody campaign of violence in 2009.

On March 23, jihadists mounted a deadly seven-hour assault on a Chadian army base at Bohoma, killing at least 98 troops, according to an official toll.

Chad declared departments near the lake “a war zone” in order to give the military free rein for the offensive.

The four countries bordering the lake on 2015 set up a formation called the Multinational Joint Task Force (MNJTF), also including Benin, to fight Boko Haram.

But Chad, whose forces have a relatively high standing in the Sahel, has shown frustration with the MNJTF following the Bohoma losses.

“Chad is alone in shouldering all the burden of the war against Boko Haram,” President Idriss Deby Itno complained last weekend.

“I met the commander of the MNJTF and asked him to take over.”

Boko Haram’s 11-year-old campaign has claimed tens of thousands of lives in northeast Nigeria and driven nearly two million people from their homes.

Separately, in Niger, the defence ministry in Niamey said its armed forces, in a joint operation with Chad, had inflicted “heavy losses” on Boko Haram in the lake region.

“Arms caches, logistical points and several boats were destroyed” and islands used as rear bases in the lake’s marshland were “bombarded from the air,” it said.

Landlocked and poor, Niger is facing jihadist attacks in opposite ends of the country — an insurgency that has spilled over from neighbouring Mali, and raids in the Lake Chad region by Boko Haram fighters.

In Burkina Faso, meanwhile, five soldiers were killed and three were wounded on Thursday when their unit came under attack from jihadists in Solle, in the northern province of Loroum, an army official said.

Around 4,000 people lost their lives last year in jihadist- or community-related violence in Mali, Niger and Burkina Faso, according to UN figures.