There are now more than over 47,000 confirmed cases of coronavirus across the continent 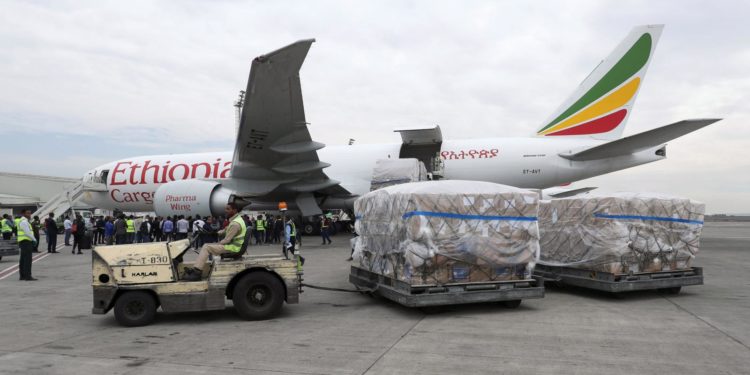 China is publicly handing out money and equipment to help fight the spread of coronavirus in Zimbabwe. But Beijing’s generosity has made some very wary.

Until now most in Zimbabwe have accepted that China’s aid and investment strategy in the country is usually tied to infrastructure development.

The partnership announced this week between the China Gezhouba Group and a Zimbabwean company to build a new coal-fired power station worth three billion US dollars fits much better into the business mould Zimbabweans and Zimbabwe business watchers have come to expect.

“China has been extremely active in pushing out support to a host of countries needing assistance to tackle Covid-19,” Piers Pigou, southern Africa consultant with the International Crisis Group, tells RFI.

“It may well be expending more energy on profiling these contributions in the face of bad press relating to its responsibilities around managing and communicating around the initial stages of the pandemic.”
The suspicious list

Here are some of what’s been supplied to Zimbabwe so far by the Chinese embassy and the Chinese private sector:

Suspicion among Zimbabweans is rife. It was strongest among government critics to begin with.

Indeed, Foreign Minister Sibusiso Moyo in early April called on Zimbabweans not to blame one group of people for the origin of the coronavirus in a clear attempt to shield China from criticism.

The late Robert Mugabe used to call China Zimbabwe’s “all-weather friend”, a gratitude sparked no doubt in part by China’s willingness to turn a blind eye to the country’s rights abuses.

Attempts by Chinese diplomats in Harare to downplay the incidents only stirred anger.

“You think that Zimbabweans are so foolish that they would buy into your pathetic explanations when the whole world knows what is going on?” journalist Hopewell Chinono said in a tweeted remark to top embassy official, Zhao Baogang.

Chinono, who has more than 134,000 followers accused some Chinese firms operating in Zimbabwe of having pillaged the country and not paying taxes.

“If companies like Huawei were paying taxes, Zimbabwe would not need donations,” he said, referring to the opaque 2014 investment agreement under which the Chinese tech giant has been exempted from paying tax.

The remarks by Chinono reflect growing anti-Chinese sentiment in Zimbabwe, at least on social media. This may gain further traction, says Pigou.

“China’s support is intended for all Zimbabweans, but there is a strong sense that beneficiation remains mediated by state and Zanu-PF (the ruling party) interests,” he said.

Lately even a member of Zanu-PF has let slip some frustration. In a tweet last week, Deputy Information Minister Energy Mutodi said the consumption of “dogs, cats, snakes, bats, monkeys” in China and other Asian countries had “left us all at risk of contracting the Covid-19”.

Said Mutodi: “We hope to up our game on beef exports to China, Indonesia & others soon.”

Coronavirus cases registered in Equatorial Guinea rise to a total of 439 confirmed by the Baney laboratory, according to the latest official count of the Ministry of Health, a report prepared by the Technical Committee for Surveillance and Response of the coronavirus in Equatorial Guinea in collaboration with WHO — released on Tuesday May 5.

626 people remain in quarantine for observation and analysis.

Malabo with 364 is the city with the most Covid-19 infections in the country and Bata has 75 confirmed cases.

The Govt extended Equatorial Guinea state of alarm on April 29, the decree establishes that people must remain in their homes, with the exception of public and private administration officials, apart from these cases, citizens may circulate through the public roads with an authorization, wearing a mask.