Many university cooperation programs start at the master's or doctoral level. The Governement of Equatorial Guinea is doing great effort that need its citizen participation. -- Brochenin Olivier 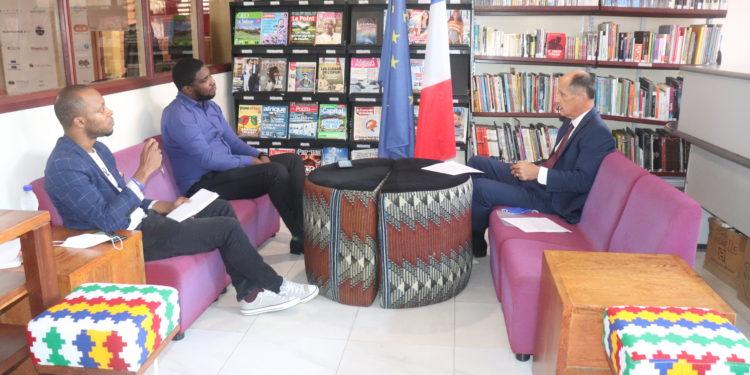 Few weeks ago, the 2021 edition of the France-Afrique summit took place in Montpellier, France, and present were Business Leaders from the entire African continent including Entrepreneurs from Equatorial Guinea alongside the French Ambassador to the country, Olivier Brochenin. Dreams Talks recently sat with the Ambassador in a one-on-one interview discussing everything from the summit to education, business and much more, in this two-part series.

Dreams Talks: How would you describe the potential impact this year’s France-Africa summit could have on the African continent?

Ambassador Brochenin: Well, this is totally new prototype. It is a summit that comes from an idea that we have had in France inspired by Africa and the dynamism of African societies. There are several civil societies in African countries and dynamism is seen throughout Africa and in Equatorial Guinea. This summit stems from the will of African societies and the desire of French President Emmanuel Macron to respond to this desire to renew the relationship and to listen to the voices of Africa.

The fact is, the leaders of the countries have many opportunities to speak officialy in many forums. Here is something else, a little different. I am talking about  Achille Mbembe, who is a Cameroonian neighbour, a writer, a thinker, a historian, a philosopher, who now works in South Africa.  Achille Mbembe has a very critical view of France and of France’s relationship with Africa. He believes that France must renew, think again, accept to see all of history, it was hard history, but also positive with Africa; with many African countries. Achille Mbembe conducted dialogues a whole year long with African civil societies. This dialogue occurred also here en Malabo.

In Montpellier, we have seen the result of all these dialogues and what I like a lot is that in Equatorial Guinea, we have been able to show the international community that was present, the dynamism of the societies that also exist in Equatorial Guinea. Thanks to many Equatorial Guineans who had decided to join the dialogue. For example, in preparation for this summit, here at the French Institute– I’m talking about SeseSité, I’m talking about Dulce Boneke who is an entrepreneur; there are artists, all that – Well, almost all African countries were represented there in Montpellier.

The impact will come from this same dynamism, that is, itwill come from a direct relationship between French capabilities and the capabilities of civil societies. In other words, in the programs we are going to cooperate with the governments; we will continue to do so, it is essential to work with governments in respect of the sovereignty of all countries, but also to listen and shake hands with civil societies.

Dreams Talks: How would that be done? How would it work?

Ambassador Brochenin: The best way is to use the same measures that came from the civil societies. What interests me is what Equatorial Guinea said when the preparatory dialogues of civil society were held. There were two very strong ideas: one of them, that France be more dedicated to the future of Africa. The other is that, there is work to be done, so that the stories that are written in the West, France, in Europe about Africa have to be changed. That not only the difficulties of Africa be talked about, but a vision of this dynamism that the youth represent, that civil societies represent. These are the strongest ideas.

I am going to issue two examples President Macron gave at the summit. He spoke of the launch of a university cooperation program. We have a program in Europe called “Erasmus”. This program (Erasmus) is of support and encouragement, something almost mandatory, for all European students to be able to study for a few months or years in other European countries and recognize their certificates. The proposal that President Macron made after having listened, is to create a sort of Erasmus between France or Europe and Africa. In other words, a funded program that supports student mobility.

The objective is to respond to the desire of mobility, circulation and conviction among the new generations in the field of higher education and research, scientific cooperation… This student mobility program will have a financing of €5,000,000 to begin with. In parallel with this “Erasmus program”, France will continue supporting Franco-African schools based on the model of advanced institutes. First part of the response, encourage the movement of ideas and support the formation of Africans.

The second idea that came from the dialogue here, in Equatorial Guinea, to tell the stories about Africa in a different way; to represent the new stories, as you are doing with Dreams Talks. In order to do so, a commission of African and French historians, also of African origin, will be set up so as to bring together their capacities. Write  a new, and have a well-worked vision of what the relationship between France and Africa is and can be. To be able to see the past, from where we see, but also to know where we are going.

Dreams Talks: As regards Equatorial Guinea, which areas do you believe are ready to start benefiting immediately from the summit and what must they do?

Ambassador Brochenin: Training, education. This is something we had already dialogued about with Dreams Hub, with Héctor, with Filiberto Ntútumu, the rector of UNGE, with the Minister of education. Equatorial Guinea can and needs to accelerate, there is a bit of a delay here when comparing with the speed that exists in Kenya, Senegal, Ivory Coast or Cameroon. Equatorial Guinea needs its sons and daughters to participate more actively. More practically, what is the challenge we can have here? The challenge is that in Equatorial Guinea there is not a strong enough PhD level. It is understandable: its university is only 20 years old. But it is a fact that many university international cooperation programs consolidate at the master’s or doctoral level. The Governement of Equatorial Guinea is doing great effort that will also benefit from its citizens’ participation.

The idea is that those who are going to benefitfirts from these circulating funds are those with a certain level of training. Basic training is the responsibility of the governments of each country. My goal is to identifiy herea fairly strong base. That is still a bit embryonic compared to Cameroon, Senegal, Kenya, Tunisia or South Africa.

We have tools. We have a program called “visas for Talents”. In other words, I could give scholarships to Equatorial Guinean PhD candidates to go to study in France. The barrier is that we do not find or if we do find, or there are very few candidates. This is why we are supporting “double curricula” between French universities and UNGE. ts rector helps us identify which faculties within UNGE are a priority. Most of these faculties are still quite young. Some are going to open up, for example, the Faculty of Philology. So we put this faculty in contact with the university of Picardie, north of France, who already has an experience in double curricula with African partners. And to initiate the effort, the cooperation department of the embassy is supporting through stipends a few students for this double curriculum. Here we are still starting; and we do not have yet the “double curricula” that produces these students that we can send to benefit from higher level program, such as the one announced in the wake of the summit of Montpellier. Hence, we are working with the French institute, with the French cooperation service to notify French universities and propose to work with the UNGE. I am grateful to Filiberto Ntútumu, His Excellency Rector Magnífico for being open to these proposals. In a few years, I am sure EG’s university system will be able to fully benefit from all the mobility programs, thanks to todays’ efforts.

What is the objective?

Let us be ambitious and have in mind what has been achieved elsewhere, after many years of cooperations: in the university ecosystem between France and Africa, four common university platforms have emerged: the regional Ivorian French common universities platform, the franco-tunisian university for Africa and the Mediteranean, the Senegalese – French campus, the French university of Egypt.

This is our goal. Get this double degree. Afterwards, a platform can be made here in Equatorial Guinea where Equatoguinean and French universities could create integrated training here. What is the advantage? The advantage is that these integrated platforms allow a large number of students to be trained without having the necessary measures to travel. This is something that seems very good to me.

The French Ambassador had more to say concerning Equatoguinean businesses and talked about how the French business community is looking forward to investing in them. Stay tuned for the second and concluding part from this interview next week!

Dreams Hub contributed to this story.