The Embassy highlighted areas of collaborations they could be more interested in – technology – and empowering young Equato-Guineans interested in pursuing a career in that field. 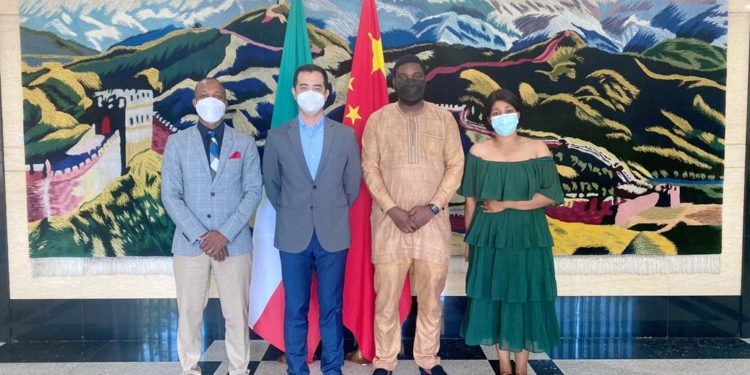 Dreams Hub Research and Innovation Center met with a delegation from the Chinese Embassy in Malabo, Equatorial Guinea, as discussions surrounding areas of collaborations were discussed. The Embassy, who called for the meeting were excited and positive about the work being done by Dreams Hub and engaged the hub’s delegation led by Founder, Oscar A. Nchaso Bekari, in conversations as both parties begin exploring best ways of collaborating.

The meeting, presided by the Charge d’Affaires of the Embassy, Ji Deng Hua, also had Ivan Somo Bita Dougan who is the Project and Programs Manager at Dreams Hub and Maria Nchaso, the Communication and Marketing Manager. Xiong Chang, Head of Politics, Chinese Embassy was also present.

The Embassy highlighted areas of collaborations they could be more interested in – technology – and empowering young Equato-Guineans interested in pursuing a career in that field. Taking into consideration that China is a global leader in the advancement and deployment of technology, tech is an area that remains important to the hub as it continues to upskill people in that field via its programs and providing developers, tech interested individuals a co-working space in its center to use. Hence, that collaboration could seemingly interest the Dreams Hub team. Other areas discussed were media and communication, culture and a skill exchange program.

In the area of business development and cross-border activities such as fintech, Ji Deng Hua suggested how Chinese markets could work together with Equatorial Guineans businesses to achieve a common goal and strengthen ties between both populations, using modern technology to implement and scale them. Nchaso used the opportunity to discuss the upcoming E-Commerce and Fintech dialogue, hosted by Dreams Hub Research and Innovation Center on November 13, 2021, extending an invitation to the Embassy.

Read also: Equatorial Guinea: Dreams Hub visits the US Embassy in Malabo with its ‘Crystal Eggs’

The Dreams Hub delegation also invited the Chinese Embassy to come visit their co-creating space at later date as both parties continue to see the possibilities of a collaboration. Ji Deng Hua and Xiong Chang commended Dreams Hub for the great work it is doing, encouraging it to continue on its path.