The East Africa and Horn of Africa regional office of the International Organization for Migration, or IOM, wants $71.6 million in order to help refugees, the internally displaced and migrants during the crisis. 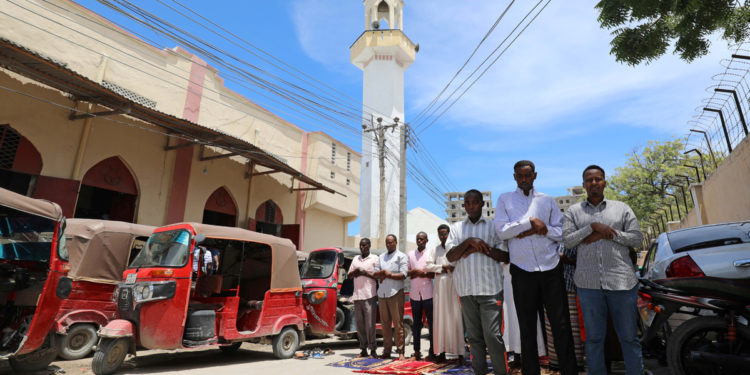 People attend Friday prayers outside the Omar Binu Katab mosque, while the spread of the coronavirus disease (COVID-19) continues in Hodan district of Mogadishu, Somalia on April 17, 2020

Migrant advocates are seeking more than $70 million from the United Nations and other donors to fund a plan aimed at helping some of the most vulnerable people in East Africa cope with the economic consequences of the coronavirus pandemic.

Among the 10 East African countries, Somalia and Ethiopia will require the most funding, at $18 million each, to cushion the impact of movement curbs on refugees and internally displaced people, the IOM said in a report, “Regional Strategic Preparedness and Response Plan COVID-19”. South Sudan comes next with needs of $15 million.

“Border closures, lockdowns, curfews and an economic freeze in the region have left millions of people stranded, vulnerable and facing an uncertain future,” the report said. “Migrant workers are losing their jobs－their only means of economic survival－and facing stigma and xenophobia because foreigners are seen as bearers of the disease.”

The agency said the pandemic has exposed the obstacles faced by marginalized groups in accessing health services. The poorest and most vulnerable families depend on remittances, it said, adding that the breadwinners abroad have been losing their jobs.

“The coronavirus outbreak is a serious public health problem. It is acutely worse for migrants in this region who depend so heavily on being able to migrate for work to survive and support their families.

“The closure of air, land and sea borders is also of huge concern because so many migrants and local communities depend on being able to move freely between porous borders in the region.”

According to the UN-affiliated body, the funds will be used to meet the humanitarian needs of migrants and internally displaced people in the region, enhance disease surveillance, provide hand-washing facilities, improve cross-border coordination and train government workers to deal with the pandemic.

The funds will also be used to help such workers monitor and map the movements of people in the region and to provide information on how people can prevent getting the coronavirus.

In the report, the IOM raises concern about the political instability in a number of countries that has left millions either displaced or living as refugees in neighboring countries.

“Internal displacement in the East and Horn of Africa region accounted for an estimated 6.3 million internally displaced persons and 3.5 million refugees and asylum-seekers under the management of humanitarian agencies,” the report said.

“In the event of the spread of COVID-19 in this setting, higher transmissibility due to larger household sizes, intense social mixing between the young and elderly, overcrowding in displaced people’s camps and inadequate water and sanitation might propagate transmission disproportionately and faster.”

Babar Baloch, a spokesman for the United Nations High Commissioner for Refugees, said that the UN refugee agency is ramping up efforts to limit the potential spread of the coronavirus in camps across East Africa and the Great Lakes region of Africa. These regions host some of the largest refugee populations in the world.

“The UNHCR is actively engaged with ministries of health, government authorities and the World Health Organization on the inclusion of refugees, asylum-seekers and internally displaced persons in national response plans,” Baloch said. “Many refugees live in remote areas many miles from the nearest government health facilities. Others live in small, overcrowded dwellings in densely populated urban areas where they face significant challenges in adhering to guidelines around physical and social distancing.”