Adesina’s visit coincided with the launch of an African Development Bank-supported project to support the empowerment and financial inclusion of women and youth engaged in cashew nut, fruit and vegetable production. 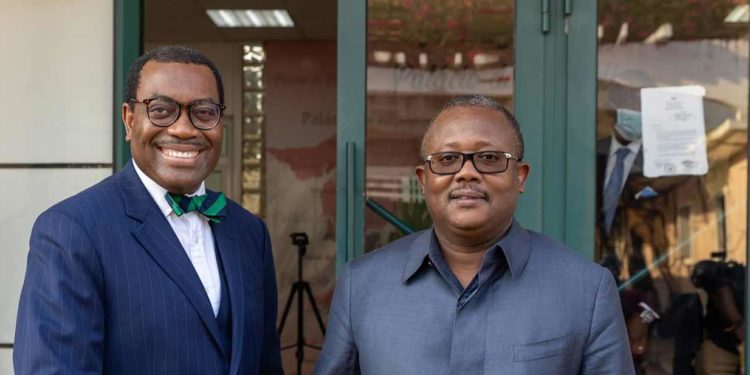 Adesina made the announcement on Friday during a visit to Bissau, where he met President Umaro Sissoco Embaló and senior government officials. Discussions covered a range of strategic issues, including strengthening the already close cooperation between the African Development Bank and the Government of Guinea-Bissau, as well as ongoing and future Bank-financed strategic projects to support the country’s economic transformation.

Following the meeting with Embaló, Adesina told reporters that the African Development Bank had earmarked $30 million in financing for projects in Guinea-Bissau. Of this amount, he said $14 million would be allocated to building road networks between Guinea Bissau and Senegal, while $8.7 million and $7 million would go to budget support and capacity building, and government reforms, respectively.

“I want to assure President Embaló of the African Development Bank’s firm commitment to support his vision for the country and the government’s program,” Adesina said. He congratulated President Embaló on his achievements and for what he described as the president’s exceptional leadership, especially in Guinea-Bissau’s management of the Covid-19 crisis. Adesina said Guinea-Bissau had achieved an African record in ensuring that 70% of the country’s population over 18 were vaccinated.

“The African Development Bank will stay here to give you support,” Adesina affirmed.

President Sissoco Embaló said: “For many years, Guinea-Bissau has been affected by political disruptions that have hampered the country’s development. This is the first time we have government stability, and we have to make use of it to accelerate economic transformation. We are grateful that the African Development Bank has always been by our side, even during difficult times. We are ready to work alongside the Bank to lead Guinea-Bissau to a new chapter of its history.”

The African Development Bank plans to set up a delivery unit to speed up project implementation. The Bank financed the establishment of the National School of Administration to improve the performance of economic and financial arms of public administration, as well as project management and monitoring.

“The African Development Bank has shown great flexibility and support during the many crises that the country has gone through, and the Covid-19 pandemic has not been an exception,” Prime Minister Nuno Nabiam said. “History will mark this visit,” he added.

Guinea-Bissau’s agriculture-based economy is dependent on cashew nut exports and has been hit hard by the Covid-19 pandemic. The country is currently pursuing a robust program to increase production and make better use of agricultural value chains, professionalize cooperatives and improve their access to financing.

GDP growth in Guinea-Bissau contracted by 2.8% in 2020, halting the positive growth rate the country had experienced since 2015. Economic recovery, however, is expected in 2022, with the resumption of trade activities and large-scale vaccination against Covid-19.

The African Development Bank’s initiatives are helping to advance the African Union’s 2063 Agenda in Guinea-Bissau, with a strategy oriented around inclusive growth, and governance-strengthening through support for infrastructure development and agriculture production.