The TCM center at the Ben Aknoun Hospital offers free medical service to Algerians as part of the Chinese government's humanitarian aid program to send doctors to the country since 1963. 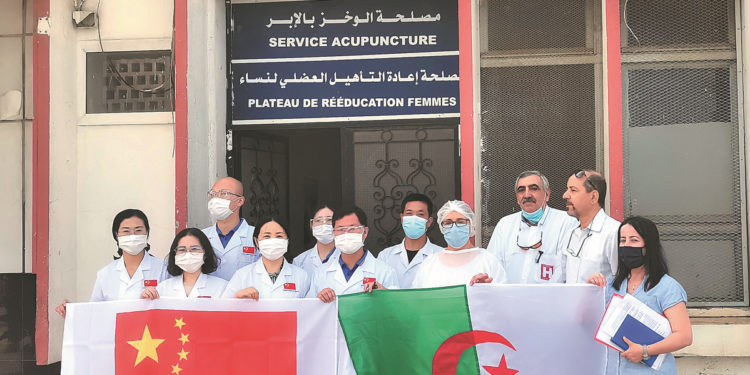 The first time Linda Messow walked into Dr Gao Shan’s office at the Ben Aknoun Hospital in Algiers, the capital of Algeria, for acupuncture therapy, she was afraid and nervous.

“I felt it was a little painful in the beginning. Later, I was able to relax gradually because of Dr Gao’s tender attention,” she said.

Messow struggled with idiopathic facial palsy for several months, and had tried physiotherapy. Her doctor suggested that she try traditional Chinese medicine, an idea that was not totally alien to her because her mother had been treated by acupuncturists years earlier.

To Messow, TCM is “a natural medicine in harmony with humans without chemicals”, and she feels better after weeks of treatment. “I noticed that my eyes and mouth have returned to normal, basically,” she said.

Gao, associate chief physician of the Acupuncture Department at the Wuhan No 1 Hospital in Hubei province, is one of the 81 members of the 27th Chinese medical team to visit Algeria.

She said that Algerians enjoy free healthcare at public hospitals, but a patient may wait for months to see a doctor.

So when the center was reopened in September after being suspended for more than a year because of the COVID-19 pandemic, it was soon fully booked.

Gao, 39, mainly treats women and children aged 5 to 80. Their symptoms include chronic pain, insomnia, facial paralysis and irregular menstruation. Some had spleen and stomach issues, or even hoped to cure infertility.

“Many patients told me they felt pain in every part of their body, and hoped we could solve all their problems,” she said. “But I was shocked how deeply they understood acupuncture and TCM. It must be because of the years of efforts by Chinese doctors here. Their excellent medical skills and professional ethics have gained a reputation.”

As most patients speak Arabic, Gao has to communicate using translation software. While treating patients nervous about the prick of the needles, Gao touches their hands and pats them on the shoulder as reassurance.

She also keeps beverages and candies in the office for those who haven’t had breakfast before therapy.

Gao remembered treating one woman with facial paralysis, who told her that she felt much better after two weeks of treatment. “One morning, the woman, the only patient who could speak English in the consulting room, suddenly said that all other patients wanted her to say ‘thank you’ to me for them, and that they were lucky to have met me,” she said.

“I also expressed my happiness. There were many such warm moments. It is really difficult to see doctors here, but patients have total trust in them.”

Ovamar Karima, another of Gao’s patients who is also a doctor at the Ben Aknoun Hospital, recently tried acupuncture for the first time, as she was suffering from cervical spondylosis, insomnia and the loss of smell and taste after contracting COVID-19.

She said she felt a very mild pain when the needles pierced her skin. “I didn’t feel nervous or afraid at all. I slept well after the first treatment. I think traditional Chinese medicine is quite amazing and effective,” she said, adding that she thinks Gao is a “wonderful and very competent person”.

Because of the pandemic, Gao and her colleagues have to wear protective suits to avoid infection, and conducting the acupuncture sessions in the suit in humid, stuffy weather is quite challenging.

“After a while, I often get a headache,” Gao said. “But we have to stick to it.”

Gao said that she was worried and afraid before going to Algeria because of the virus, and had learned from colleagues about the difficulties of working in Africa.

But as she told her child, “as a Wuhan local, I saw how helpers from around the world came to assist when the city was hit hardest, and as a medical worker, it’s time for me to help people in need”.

This was Gao’s first visit to Africa. After lengthy customs clearance and nucleic acid testing, the team finally got in the car to go to their residences at the Mustapha Pacha Hospital.

“The sky was very blue with almost no clouds. The houses were mostly white, and people living along the street had decorated their balconies with plants. That was my first impression of the country,” she said.

Besides working and shopping, the team barely go outside because of the pandemic. But they have their traditional entertainment－farming.

“Green-leaf vegetables are rare and expensive, so we figured out a way of planting them on the balcony,” she said. “I hope the pandemic ends soon so we can tour the beautiful country.”

In 1963, China sent its first medical team of 10 people to Africa on the invitation of the Algerian government a few months after it declared independence in July, 1962. Since then, China has sent 3,317 medical workers to Algeria.

The 27th team set off in late August, although the pandemic still showed no sign of receding. Its members come from 58 public medical institutions in Hubei, including doctors of gynecology and obstetrics, anesthesia, surgery and ophthalmology, according to Yang Yong, chief of the 27th team.

In 1975, a Chinese medical team started the first TCM acupuncture class in Algeria and trained 25 doctors in two years. In 2017, the two governments signed an agreement for China to send five TCM doctors every year to offer targeted treatment and organize regular training for Algerian doctors.

Yang and his team didn’t return to China for Spring Festival in early February. “We know our responsibilities. There is no national boundary to saving lives. We hope to increase the health levels of Algerians and enhance China-Africa friendship,” he said.