President Paul Kagame Thursday extended appreciation to leaders from different parts of the world for joining Rwanda to commemorate the 26th commemoration of the Genocide against the Tutsi. 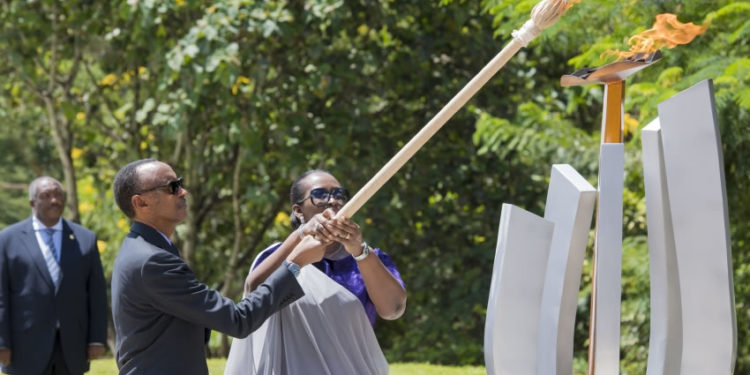 Rwandans across the country and elsewhere on Tuesday were joined by friends to remember more than a million victims of the Genocide who were brutally killed in 1994.

The events on Tuesday marked the beginning of a mourning period in memory of the victims.

Kagame led the country along with other top government officials to lay wreaths on mass graves at the Kigali Genocide Memorial and light the flame of hope, kicking off 100 days of remembrance.

Thank you for your kind wishes & always standing in solidarity w/ Rwanda as we remember victims of the Genocide against the Tutsi:@antonioguterres, @AbiyAhmedAli,@SahleWorkZewde,@AUC_MoussaFaki,@eucopresident,@LMushikiwabo,@AnnLinde,@romeodallaire,@Atayeshe,@JimInhofe,@JaredCohen

Leaders from different parts of the world, diplomatic communities, activists, and friends from all walks of life commiserated with Rwanda, sending messages of love to the people of Rwanda.

This includes Ethiopia’s Prime Minister Abiy Ahmed and the country’s President Sahle-Work Zewde, US senator Jim Inhofe, UN Secretary-General António Guterres, and the Chairperson of the AU Commission, Mousa Faki among others.

“Thank you for your kind wishes & always standing in solidarity (with) Rwanda as we remember victims of the Genocide against the Tutsi,” Kagame expressed gratitude to the leaders.

This year’s commemoration was held differently as Rwandans were not able to physically join together in annually organized events due to the coronavirus outbreak that has stopped large gatherings.

However, President Kagame told Rwandans that the country will never cease to commemorate regardless of the unusual circumstances like that caused by COVID-19.

This year, large gatherings like the Walk to Remember, Night Vigil and memorial site visitations were stopped to halt the spread of the virus.

But events are being held online, and series of commemoration and education and awareness activities are taking place on radio and television stations.