A man died at the parking lot of Kenya’s largest referral hospital where a strike by 5,000 workers paralysed operations on Monday. 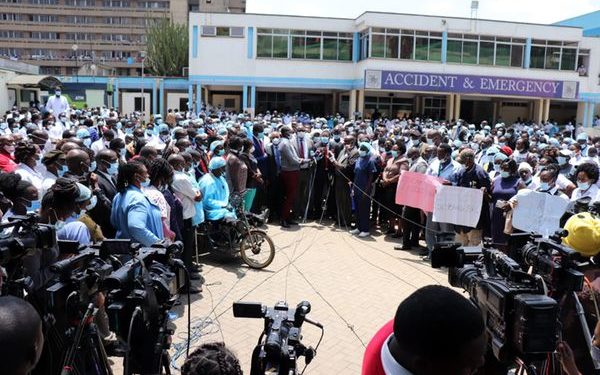 The boda boda rider was taken to the hospital by his friends following an accident.

But the management of the Kenyatta National Hospital (KNH) insisted the patient was in a critical state and that his death was not due to negligence.

Dr Stanley Kamau, a board member at KNH, said the hospital and staff were not to blame for the death.

The strike disrupted services at the hospital and left patients unattended. The striking employees are protesting a delay to effect a pay rise totaling Sh601 million.

Some families were forced to move unattended patients from the hospital as members of the Kenya Union of Domestic, Hotels, Educational Institutions and Hospital Workers (Kudheiha), the Kenya National Union of Nurses (KNUN), and the Kenya Medical Practitioners, Pharmacists and Dentists Union (KMPDU) commenced their strike.

The workers are demanding implementation of resolutions from the State Corporation Advisory Committee, which upgraded the hospital’s parastatal status from 3C to 7A in 2012.

Following the reclassification, all KNH staff were to benefit from enhanced pay but it has never been effected.

Some workers went on strike late last year, prompting a return-to-work formula with management to end the boycott.

But the Salaries and Remuneration Commission (SRC) has said the formula is not a basis for demanding a review of remuneration, arguing it’s not fiscally sustainable and will distort the salary structure in the sector.

SRC has asked the referral to retain the current pay structure as it awaits a job evaluation that will inform the remuneration review cycle for 2021/22 to 2014/25.

KNUN Secretary-General Seth Panyako said members were not interested in the job evaluation and wanted their salaries adjusted as the matter had been approved by Parliament.

“We want SRC to write to the CEO giving authorisation for payment because we know the money is there. We will not go back to work until we get the money,” Mr Panyako stated.

KMPDU’s acting Secretary-General Chibanzi Mwachonda claims SRC is the only obstacle and it is frustrating health workers in the public sector.

The hospital’s chief executive officer in a letter to SRC yesterday said KNH will ensure the Sh601 million budgeted for in the 2020/21 financial year is paid in October.

In a letter dated February 12, 2013, to then Finance Principal Secretary, KNH detailed the breakdown of the salaries from the CEO to the lowest Job Group K16/17.