Spokesperson for the Libyan National Army (LNA)Ahmed al-Mismari announced on Wednesday the arrest of the most dangerous terrorist in Libya, called Mohammad Mohammad al-Sayyid, known as Mohamed al-Sanbakhti or “Abu Khaled Munir”. 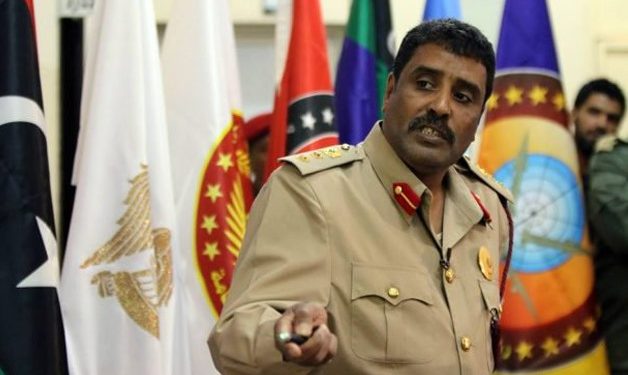 Sayyid was the assistant of executed Egyptian terrorist Hisham Ashmawy and was involved in committing terrorist crimes in Egypt, ashe participated in the bombing of several Coptic churches.

According to the official spokesman of the armed forces, Al-Qaeda terrorist belongs to an Egyptian family convicted of terrorism, as he has two brothers in Egyptian prisons.He noted that Abu Khaledis Ashmawy’s successor in Libya.

The case was referred to the Grand Mufti for religious advisory on February 1 as a standard procedure that seeks the religious authority’s approval on sentencing a defendant to death, although the Grand Mufti’s decision is not binding.

In this case, 208 defendants were charged with 54 crimes that include assassinating policemen, attempted murder of former Minister of Interior Mohamed Ibrahim, and bombing security institutions’ buildings.

The Public Prosecution’s arraignment states the following crimes: founding, leading, and joining a terrorist group that targets to suspendthe constitution, laws, and prohibit the state’s institutions from fulfilling their responsibilities; violating the citizens’ rights and freedoms and jeopardizing national unity and social peace; espionage with theforeign organization embodied in Hamas, and the military branch of the outlawed Muslim Brotherhood; vandalism of state buildings; deliberate and attempted murder; and, acquisition of firearms, ammunition, and explosives.

This is the second death sentence handed to Ashmawy after he was extradited from Libya to Egypt. InNovember 2019, Ashmawy was handed the first death penalty by the Military Criminal Court over committing 14 crimes pertinent to the Farafra Terror Attack against a Border Guard ambush 5years ago, killing 28 officers and soldiers.

The handing over of HishamAshmawy, the ex-military officer and the mastermind behind several high profile attacks in Egypt, was seen as a revenge for dozens of terror victims inarmy and police forces over the past years.