UK Prime Minister Boris Johnson witnessed weekly drinking sessions by his staff throughout the pandemic, according to a report on Saturday that stoked fresh calls from his own party for the embattled leader to quit. 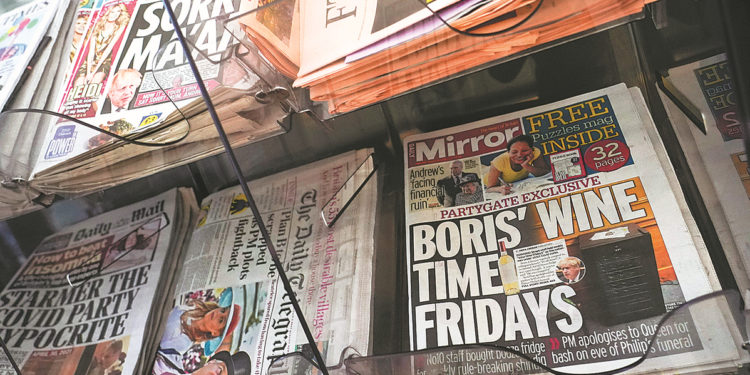 Conservative MPs, many of whom were spending the weekend back in their home constituencies, say they are being deluged with messages from voters outraged at accounts of rule-breaking in Downing Street.

Johnson was spending the weekend in self-isolation after a family member tested positive for COVID-19. The opposition Labour Party said he was “literally in hiding” and should resign.

Former Conservative minister Tobias Ellwood, an influential backbench MP, told the BBC that Johnson must “lead or step aside”.

Whether Johnson and his staff knowingly broke the law during COVID-19 lockdowns is the central question being addressed in an inquiry by senior civil servant Sue Gray.

After weeks of denials and stonewalling, Johnson last week apologized in parliament for at least one boozy event organized by his staff which he attended in May 2020, when Britons were banned from socializing.

But those were not isolated events, according to Saturday’s Daily Mirror, which published a photograph of a wine cooler being delivered to a Downing Street back door in December 2020.

Staff would stock the fridge with suitcase-loads of alcohol, and Johnson would often drop by to their “Wine time Fridays”, it said.