William Ruto, the deputy president and Raila Odinga, the main opposition leader, are the frontrunners in the competitive race. 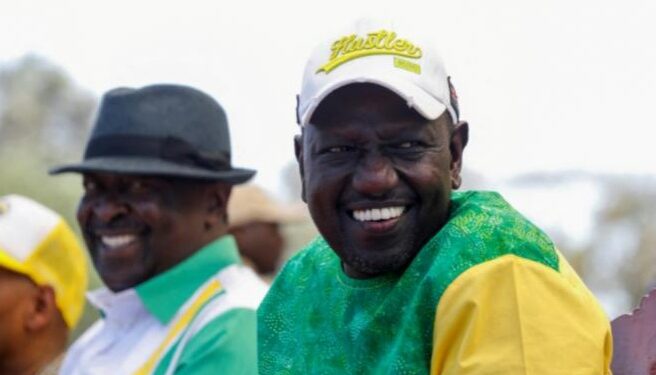 Campaigns for Kenya’s presidential and parliamentary elections on Aug 9 are heating up even as leaders call for peaceful campaigns, elections and a smooth transfer of power.

On Saturday, President Uhuru Kenyatta officially endorsed Odinga, 77, for the presidency after the ruling Jubilee Party joined forces with the Azimio la Umoja translated to mean Quest for Unity, a coalition of more than 20 political parties headed by Odinga.

Kenyatta said Odinga had been selected as the coalition’s flag-bearer because he has what it takes to win the elections.

“I have no doubt that he is capable, he has the will and God willing he will be able to ensure our nation forges ahead in development and unity,” he said.

In March 2018, Kenyatta and Odinga struck a deal popularly termed as Handshake, putting their differences aside for the sake of national stability following a disputed 2017 general election.

“Nobody ever imagined that parties and individuals that fought on opposite sides in 2013 and 2017 would unite,” Odinga said in his acceptance speech after being elected the coalition’s representative for the forthcoming elections.

“I thank my friend and brother President Uhuru for this most unlikely journey that we started four years ago and which has changed the history and politics of this country.”

Odinga, who will be vying for the top job for a third time, promised to improve the economy, fight poverty and corruption as well as build on President Kenyatta’s legacy if elected.

“I pledge to lead an all-out war on poverty, unemployment and hopelessness in Kenya and actualize Article 43 of our Constitution which guarantees Kenyans the rights to education, health, food, water, housing and social security. No single Kenyan should ever feel forgotten in our country,” he promised.

William Ruto, 55, will be competing under the banner of the United Democratic Alliance party. The two-term deputy president is selling a bottom-up economic model in his campaigns, which he says will address unemployment and extreme poverty in the country.

According to his party Twitter account, the model will be achieved by prioritizing the needs of the small and medium enterprises that account for 80 percent of jobs in the country.

In his campaigns, Ruto has branded himself as the champion of the “hustlers”, people who are struggling to make ends meet, particularly the youth.