Though the Vice President is yet to declare his interest to run in the 2023 presidential election, his body language and that of his camp suggest that it is just a matter of time before he goes public with his intentions. 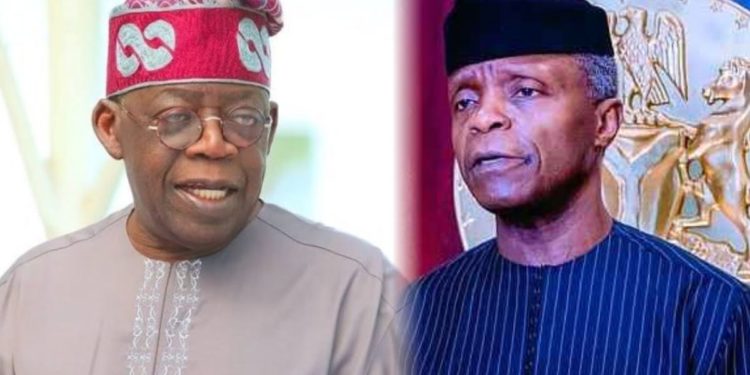 He said a strategic stakeholders meeting must be held by the leaders, including past and present day governors for the interest of the region and the betterment of the nation at large towards the 2023 presidential election.

READ MORE: Nigeria 2023: How my friendship with Tinubu caused me problems with Obasanjo – Orji Kalu

Ajulo, in a statement on Tuesday, was reacting to the recent political developments in the region involving Osinbajo, Tinubu and their teaming supporters.

The senior lawyer is of the opinion that the developing political battle between the two camps may lead to a crisis that may serve as a clog in the wheel of the region from producing the next president.

“It will be unfortunate for the southwest to blow this chance of a lifetime to further reposition Nigeria towards the path of progress,” he said.

He, however, noted that Osinbajo is best positioned to take over from President Muhammadu Buhari in 2023, calling on Tinubu to instead of battling the position with his loyalist, support the Vice President to ascend power.

READ MORE: Nigeria 2023: Why next Lagos Governor should be a woman – Oyefusi

“…It is no news that these two men do not have unfriendly feelings towards each other but a lot of their followers and lackeys have started throwing bricks of words across walls, and that is certainly an invitation to crisis,” Ajulo said.

“Undoubtedly, Osinbajo has represented this Government at different fora and definitely, would have seen more than his leader. It is a big plus that he is part of the government at the apex level.

“Asiwaju has done well for his followers and people, and I personally acknowledge that. But I strongly believe that it will further glorify Asiwaju’s leadership to support the Vice President Yemi Osinbajo as the next President.”

After a closed door meeting with President Buhari at the Presidential Villa two weeks ago, Tinubu declared his intention to run in the 2023 presidential election.

The former Lagos State Governor disclosed to State House correspondents that he had already informed the President of his desire to battle it out with whoever for the country’s number one position.