Nigeria: One dies, many trapped as eight-storey Imo building collapses

Tragedy struck in Owerri, the Imo State capital, on Thursday, as one person died, while 14 others were rescued from the rubble of an uncompleted eight-storey building, which collapsed. 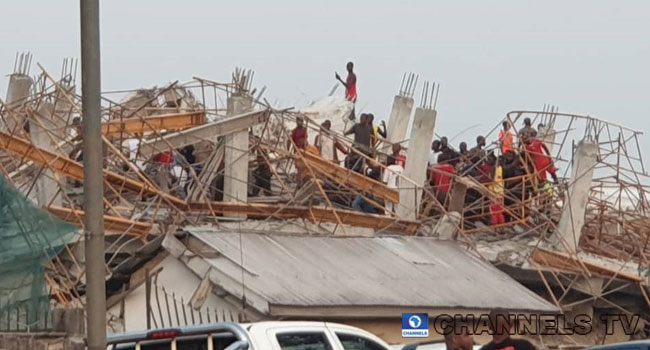 The incident, which happened on the Yar’Adua Drive, caused panic in the state capital as many victims were trapped in the rubble.

When our correspondent got to the scene of the incident, security operatives, state government officials and personnel of the Nigeria Red Cross were busy with the rescue mission.

The Deputy Chief of Staff in charge of Operations at the Government House, Emeka Agbor, led the rescue operation.

The Commissioner for Health, Damaris Osunkwo, told journalists that while one person had been confirmed dead, 14 had been rescued and over 25 were still under the rubble.

The police spokesperson in the state, Orlando Ikeokwu, told our correspondent on the telephone that the police were working with other stakeholders to ensure that those trapped in the rubble did not die but were rescued.

Policemen, who cordoned off the scene with red ribbons, stopped motorists from plying the road.

Our correspondent gathered that the building had remained uncompleted for many years.