A man, who was driving in a sport utility vehicle, was said to have been hit by a bullet in the upper arm and was rushed to a hospital after the robbers left. 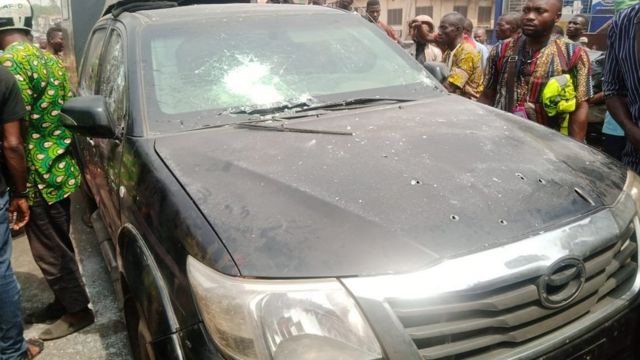 Two policemen and a civilian have been confirmed dead after armed robbers attacked a bullion van conveying money from a bank on Iwo Road to the Idi-Ape area of Ibadan, Oyo State.

One of the hoodlums was also killed during a shootout with the police.

The incident happened around 1:35 pm on Thursday in the Idi-Ape area, where the robbers reportedly waylaid the bullion van.

Eyewitnesses told our correspondent that the bullion van was heading towards the Gate area of Ibadan when the armed hoodlums, who were in a Toyota Sienna, overtook the van and opened fire on the occupants and the police escorts.

One of the victims reportedly killed was an Okada rider who was oblivious of the mission of the occupants of the Sienna.

The commercial motorcyclist, who was said to be in a hurry, reportedly attempted to overtake the hoodlums’ vehicle when he was shot dead by the robbers.

But some residents also said the escorts engaged the robbers in a shootout, adding that the hoodlums outnumbered the operatives and killed two of them.

Some motorists, who were unlucky to be at the scene, reportedly sustained gunshot injuries.

A resident, who identified himself as Waheed Adegoke, said the robbers carted away huge sums of money from the bullion van.