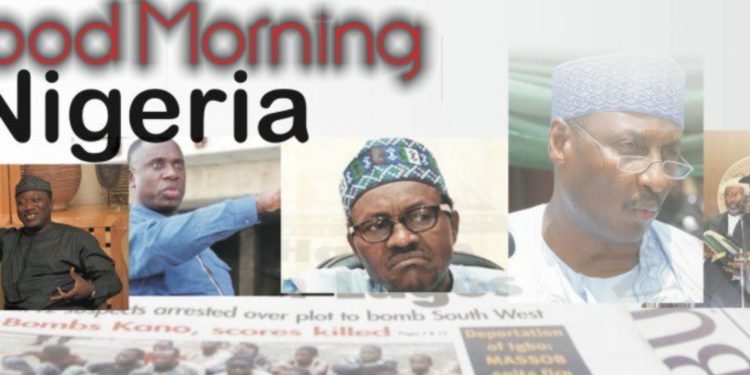 1. Nigeria, on Sunday, recorded one thousand, four hundred and forty-four (1444) new COVID-19 cases in the country.

The Nigeria Centre for Disease Control (NCDC), which confirmed the figure in a tweet via its Twitter handle Sunday night, said the country has now recorded 110, 387 COVID-19 cases and 1,435 deaths officially.

2. The Inspector-General of Police, Mohammed Adamu, has confirmed that bandits attacked officers in Kaduna State on Friday.

Force Public Relations Officer, Frank Mba, in a statement on Sunday disclosed that the personnel were attached to Police Mobile Force – 9 Squadron, Kano.

3. Former Speakers of the House of Assembly in Ekiti and Ondo States have denied declaring support for the Bola Tinubu 2023 presidency.

Five ex-Ondo Speakers: Victor Olabimtan, Oluwasegun Bolarinwa, Ayo Agbomuserin, Abdusalam Olawale Taofeeq, Kenneth Olawale, and Patrick Ajigbolamu (Ekiti) in a statement on Sunday, noted that Lagos Speaker, Obasa was at their meeting to solicit the support of the ex-speakers, as automatic national delegates, “for the aspiration of his mentor, Asiwaju Bola Tinubu”.

Buratai said the destruction of gun trucks and decimation of a number of the attackers was a good display of gallantry.

5. A total of 17 persons were said to have been kidnapped by armed bandits in three communities of Bassa/Kukoki wards in Shiroro local government area of Niger State.

They were allegedly abducted on Saturday night in Madagwa, Wongo and Marenje areas of the council.

6. The Socio-Economic Rights and Accountability Project (SERAP) has urged the President of the Senate, Ahmed Lawan and the Speaker, House of Representatives, Femi Gbajabiamila to stop President Buhari from selling public properties to fund the 2021 budget.

SERAP tasked the government to cut salaries and allowances of top officials to address the growing level of deficit and borrowing, rather than sell national assets.

7. Supporters of the All Progressives Congress (APC) and National Rescue Movement (NRM) in Gusau Local Government Area of Zamfara have defected to the Peoples Democratic Party (PDP).

Leader of the defectors, on Sunday, Bello Jafaru explained that their decision to join PDP was a result of the present administration’s efforts in tackling insecurity in the State.

8. The Lagos State government has scheduled the second term of the 2020/2021 academic session to run for 61 days for public and private schools in the State.

According to the Commissioner for Education, Mrs Folasade Adefisayo, this will be the start of the second term for 2020/2021 academic session. She also noted that this is in line with the Federal Government’s resolution after reaching a consensus with relevant stakeholders.

Atabong, an eyewitness, said though no particular cult group has been identified, the attack was very fierce.