France decided to leave due to disagreements with the generals who now call the shots in Mali, Macron explained during a press-conference at the Elysee Palace in Paris. 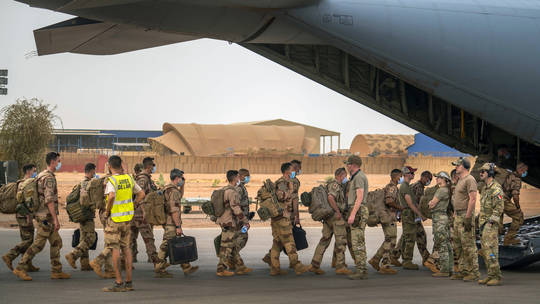 France’s President Emmanuel Macron announced the pullout of French troops from Mali on Thursday, insisting that almost a decade-long military operation in the West African country was not a failure.

“We can’t remain militarily engaged alongside de-facto authorities whose strategy and hidden aims we do not share,” he said.

Mali has witnessed two coups since 2020, with ties between Paris and Bamako taking a nosedive after the military reneged on its promise to hold an election this February, instead clinging to power at least until 2025. In late January, the French ambassador was expelled from the country.

Despite the withdrawal, Macron said that he “totally refuses” to call the French military operations in Mali a “failure.” Paris deployed troops to the country when Islamist militants were advancing on the capital, with that incursion helping to prevent the state from collapsing, he insisted.

Operation Serval was launched by Paris in Mali in 2013. A year later it was replaced by the larger Operation Barkhane, aimed at tackling insurgency in the whole of the Sahel region, which – besides Mali – spans Chad, Burkina Faso, Niger and Mauritania.

Mali hosted around half of the French forces in West Africa, which at some point reached 5,100 troops. France has already been withdrawing some of its service personnel from the region with the eventual goal of reducing the contingent to between 2,500 and3,000 by 2023.

“The heart of this military operation will no longer be in Mali, but in Niger,” Macron said. The withdrawal of France’s forces from Mali will take four to six months, he said, adding that during this period there’ll be fewer anti-terrorist missions in the Sahel.

The move by Paris means that the European task force Takuba will also be redeploying from the country.

“We have agreed with Europe that the struggle against terrorism in the Sahel can’t be the business of African countries alone, there’s a consensus on this,” Sall pointed out. He was backed by Akufo-Addo, who also insisted that the UN peacekeeping mission should continue in Mali despite the French pullout.