President Paul Kagame has called for the review and consideration of sanctions against two African countries, Sudan and Zimbabwe, to support their ability to respond to the Covid-19 pandemic. 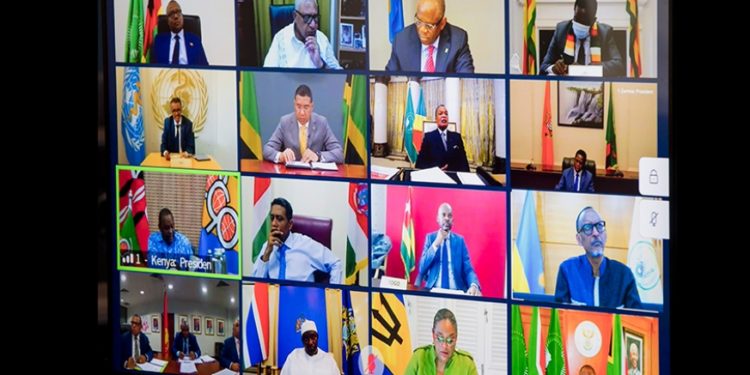 Kagame was speaking at the first Extraordinary Intercessional Summit of Organisation of African, Caribbean and Pacific States.

The meeting was chaired by Kenyan President Uhuru Kenyatta and held through video conference.

Kagame said that while effects of Covid-19 could persist for long even after the virus has been defeated, increased cooperation and mutual interdependence will guarantee the effectiveness of international response.

“Effects of Covid-19 will persist long after the virus is defeated and the road to recovery will be long. Increased cooperation and mutual interdependence will be the hallmark of effective international response,” he said,

With uncertainty of how long the pandemic and its consequent disruptions will last, the response capacity of many African, Caribbean and Pacific States requires reinforcement.

“In this context, it is important for African, Caribbean and Pacific States to cooperate closely on measures to end the pandemic and enhance economic resilience. In particular, coordination will be needed to ensure equitable access to treatment, vaccines and medical supplies,” he said.

Among notable aspects of existing cooperation include the Africa Centres for Disease Control and Prevention whose input has been visible in improving testing capacities as well as the African Union which is coordinating advocacy efforts as countries seek fiscal space to respond effectively.

In this context, Kagame called for lifting of sanctions against Sudan and Zimbabwe in order to support their ability to respond to the health crisis.

President Kagame said that the ongoing negotiations to define the next phase of the relationship between the OACP States and the European Union should not be derailed by the pandemic.

The talks which will result to the Post-Cotonou agreement, he said out to reflect the new realities of the changes in OACP’s social and economic development.

“At the same time, we should seize this opportunity to ensure that the prevention and recovery measures under discussion here are fully integrated into the final agreement. Europe will remain an important partner to our regions just as we are important partners for Europe,” he said.

Kagame also reiterated his support to the World Health Organization and Its leadership under the leadership of Dr Tedros Ghebreyesus who was also present at the meeting.