The summit was attended by over 10,000 delegates representing over 500 political parties from around 170 countries 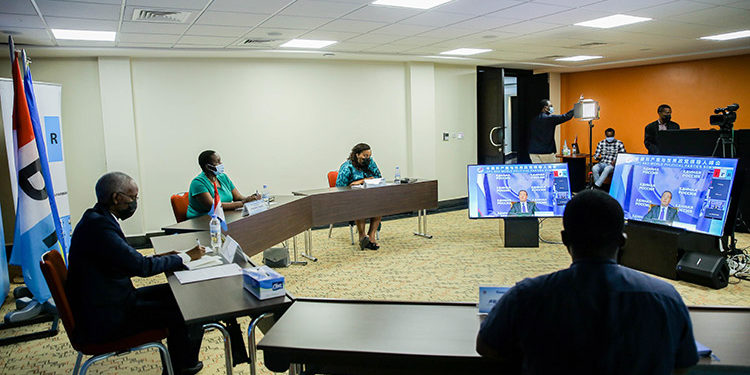 The Secretary General of Rwanda’s ruling party, RPF-Inkotanyi, Francois Ngarambe on Tuesday July 6, attended the global summit for political parties, which was convened by the Communist Party of China (CPC), the Chinese ruling party.

Held virtually owing to the global pandemic of Covid-19, the summit was attended by over 10,000 delegates representing over 500 political parties from around 170 countries, according to organisers.

It was held under the auspices of the centenary celebrations of the Communist Party of China and it was presided over by Chinese President Xi Jimping, who is also the General Secretary of his party’s central committee.

Chinese President Xi Jimping, who is also the General Secretary of his party’s central committee addresses the summit.

During his speech, Ngarambe congratulated the CPC on celebrating 100 years of its existence, saying that this was equally the celebration of the party’s achievements that have seen China being transformed into a prosperous country, which he said places its people at the centre of its decisions.

He added that RPF-Inkotanyi attaches great importance to the pro-people centeredness ideology as a vital leadership principle to develop the people’s well-being.

“It is a strong foundation on which sustainable socio-economic development takes place. I, therefore, wish to thank you as well for choosing a matching theme to our shared leadership values and principles,” he said.

The meeting was held under the theme; ‘For the people’s wellbeing: the responsibility of political parties’

Ngarambe was accompanied at the meeting by a delegation of senior top cadres, including commissioners heading different dockets within the party.

“As I conclude, allow me to once again congratulate the Communist Party of China for their Centenary and to thank them for convening this important gathering that will certainly contribute to the already existing good relationship that CPC enjoys with other political parties across the world.”

Participants at the meeting included Heads of State of different countries who were representing their respective political parties.

In his speech, President Xi challenged political parties to shoulder their political responsibility to pursue the people’s wellbeing and the progress of mankind.

President Xi used the speech to rally effort towards global development, saying that; “We need to enable all countries to step up development cooperation, and see to it that the fruits of development are shared by all.”

China and the RPF-Inkotanyi enjoy warm bilateral ties and over the years, the two political parties have exchanged high-level delegations.