Called Action Against Desertification, the initiative combines the traditional knowledge of communities with the latest technology to transform the land. 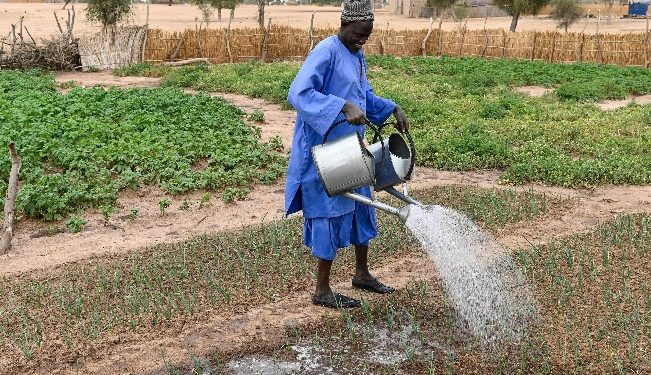 A key element in the initiative is the Delfino mechanical plow, a heavy digger that cuts through impacted, bone-dry earth to a depth of more than 50 centimeters.

The plow, which is being used in Burkina Faso, Niger, Nigeria and Senegal, makes the soil more permeable for planting than digging by hand.

The plow can cover up to 20 hectares in a day when hooked up to a tractor. Around 100 farmers used to cover a hectare a day when digging traditional half-moon rainwater harvesters.

The half-moon is a traditional Sahel planting method that creates contours to stop rainwater runoff, improving water infiltration and keeping the soil moist for longer.

After plowing with the Delfino, the seeds of woody and herbaceous native species are then sown directly, and inoculated seedlings planted.

According to the UN’s Food and Agriculture Organization, which introduced the initiative, the plow makes the soil more permeable for planting than the traditional labor-intensive methods. The program has also been extended to countries in the Asia-Pacific region and the Caribbean.

“In the end, the Delfino is just a plow. A very good and suitable plow, but a plow all the same,” Moctar Sacande, the coordinator of FAO’s Action Against Desertification program, said. “It is when we use it appropriately and in consultation and cooperation that we see such progress.”

Sacande said whole communities benefit from the growing piles of fodder crops resulting from the program.

“They can feed their livestock and sell the surplus, and move on to gathering products such as edible fruits, natural oils for soaps, wild honey and plants for traditional medicine,” he said.

Nora Berrahmouni, the FAO’s senior forestry officer for the African regional office, said the plow has greatly reduced the labor for women who are mostly engaged in the digging activity, as the season comes when men have already gone on the move with their animals.

Land degradation has been worsening in the Sahel, and could leave forests at risk of being cleared to make way for productive agricultural land, the FAO said.

READ MORE: Rebecca Enenchong is one of Forbes 50 over 50 women in Europe, the Middle East and Africa

“By bringing degraded land back to life, farmers do not have to clear additional forest land to turn into cropland for Africa’s rising population and growing food demands,” the agency said.

A report by the agency indicated that the continent loses 3 percent of its GDP each year due to soil and nutrient depletion.

The continent spends more than $35 billion on food imports annually as a result of degraded forests and croplands. That comes on top of the associated loss of land productivity and the effects of desertification.