Researchers in China have developed a wireless flexible skin patch that enables the exchange of tactile stimuli between a human operator and a robot. 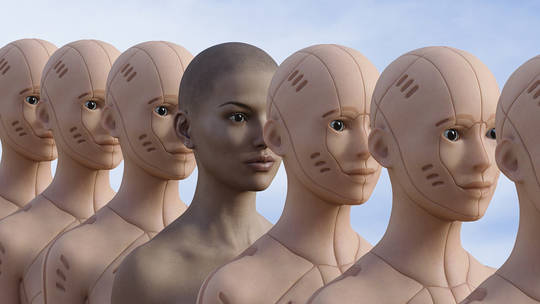 Crafted by a team of scientists from City University of Hong Kong, Dalian University of Technology, Tsinghua University, and the University of Electronic Science and Technology of China, the device is sensitive enough to capture movement and stress factors, for instance twisting and turning.

While there is already technology that allows humans to operate robots remotely, what makes this ‘electronic skin’ patch stand out is the fact that it is far less bulky, easier to handle and, last but not least, apparently provides more feedback than its predecessors.

In an article published in Science Advances journal, the Chinese researchers explain in more detail what technical features make that possible.

Patches are placed on the operator’s joints, with sensors reacting when a patch is bent, and sending the corresponding signal to the robot directly via Bluetooth, or alternatively, through a local network or the internet. The sensors are made of piezoresistive materials, the electrical resistance of which changes when subjected to mechanical stress, thus allowing the capture of the operator’s movements.

The system allows two-way feedback, as similar sensors are attached to parts of the robot. Signals are sent over to the electronic skin, where they activate tiny magnets that vibrate at different frequencies corresponding to the pressure applied. So sensitive is the device that the operator can tell between softer and harder pieces of rubber held by a robot, the researchers claim.

With the use of Bluetooth, the feedback signals are delivered in an impressive four microseconds, with that figure increasing manifold when operating through a Wi-Fi network, according to the article. However, regardless of how the data is transmitted, the delay is below the 550 microseconds an average human takes to react to tactile stimuli anyway.

The device’s battery allows for more than an hour of non-stop work, while in standby mode it can last for up to two weeks.

Although still a prototype, the system could come in handy down the road, with bomb disposal and radioactive waste cleanup being just some of the areas where robotic assistance would likely be appreciated.